While Obama used the promise of Hope and Change and promises bring prosperity to the American people, Obama own brother is near homeless living in a shanty. Obama promises to be there for the American people and serve them, although when one crosses into the life of George Hussein Obama and President Obama’s his half-brother it becomes evident that Obama cannot even help his own brother, how can the American people expect Pres Obama to help them? 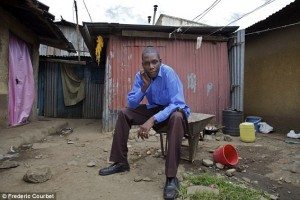 In Kenya surrounded by a junk-strewn landscaping, stepping over streams of sewage, the appearance of this slim, angular man prompts giggles and pointing from children in rags playing in the muck water nearby.

Today, while Barack entertains at the White House, flies aboard Air Force One and is a friend of film stars and royalty, George, 30, is to be found slumped in his corrugated iron shack which even fellow slum-dwellers regard as a hovel.

The details of George Obama’s lifestyle emerged when he agreed to appear in a documentary film being made by one of Barack Obama’s most trenchant critics. Called 2016, and directed by the production team behind Schindler’s List, the film sets out the horrors of another four years of President Obama in office.

Clearly following the dictum that the best place to hide a tree is in a forest, George’s decision to settle in a slum called Huruma — which is scarred by alcoholism, drug addiction and violence — means his own destructive behaviour attracts little attention.

Although he claims not to be using heroin or cocaine, George now spends his time drinking what locals call Chang’aa — a spirit distilled with maize and spiked with chemicals — from the moment he wakes to the moment he slips into unconsciousness. Laced with ethanol, embalming fluid or battery acid to give it more kick, this substance is regularly blamed for causing blindness and death when the criminal syndicates behind the trade mix it wrongly.

A glass costs about 10p and, after just five small shots, even hardened drinkers can barely remember their own name. Regular users suffer liver and kidney failure, as well as mental impairment known as ‘wet brain’.

When writers track George down early one morning to find out about his life, he’s already been for a liquid breakfast at the nearest Chang’aa den, where sex with prostitutes is also on the menu in a old mattress kept at the back.

Some journalist invite George to lunch at their hotel. For the next two days, he lays siege to the mini-bar, invites a succession of girlfriends and ‘security advisers’ to wine and dine at their expense, and behaves like he is a famous, spoilt celebrity.

He also repeatedly demands ‘kitu kidogo’ — Swahili for something small, which, of course, means something large and financial — and is appalled when they refuse to hand out cash to his assorted girlfriends.

Paradoxically, George also moans endlessly about the Obama name being a burden and a curse — yet, at the same time, unashamedly uses it to make as much money as possible to spend on drink and drugs.

‘People are only interested in me because of my brother,’ he sighs, slurping a double Johnnie Walker, with a beer chaser — one of many. ‘I hate it. People all want me to be someone else.’

George first met his now-famous sibling in a playground when he was at primary school. Barack was a young visitor to Nairobi just a few years after their father died in a car crash. George recalls he was playing football when his brother arrived to say hello.

The second time their paths crossed was when Obama — then a Senator — was on a tour of East Africa in 2006, and visited Nairobi to see his family. They shook hands — the two utterly different worlds they inhabited coming together under the African sun.

George Obama says. ‘I’m an adult. Everyone thinks he sends me cash. But I’m not a beggar.’ But asked if he’d take cash if Obama offered it, George smiled and said: ‘Seriously! Yes! Who wouldn’t?’

This is just a title. In reality, he spends virtually every day getting drunk or sleeping off the effects. So where did it all go wrong for the 30-year-old? Of course, George is following in something of a family tradition: the father he and the President share was also a notorious drunk and habitué of township Chang’aa bars.

He, too, had a good start in life. Born into a poor family near Lake Victoria, the brothers’ father — also Barack — was a brilliant student. He became the first African to win a scholarship at a prestigious university in Hawaii.

It was on the American island that Barack Snr met Ann Dunham, an American academic and anthropologist. Despite the fact he was already married to a woman in Kenya, he claimed, dishonestly, that he was divorced. He married Ann in 1961 when she was already three months pregnant with Barack. But when Obama Snr pursued his studies at Harvard, he continued to have affairs — and split from Ann in 1964.

Eventually, he returned to Kenya — leaving Barack in Hawaii — and his heavy drinking spiralled out of control: after fathering George to his fourth wife Jael in Kenya, he died six months after the birth in a car crash in 1982.

George grew up in a middle-class Nairobi suburb with his mother, who married again, to a white man, a French aid worker — a fact he blames for his subsequent rebellion. ‘I was the only guy with a white father in my street. I wanted to be the same as the other black kids,’ he says.

Despite his brother’s role as American President, George Obama says that he has no interest in politics
Drinking and smoking marijuana by the age of ten, five years later he was thrown out of boarding school, where he played rugby and learned foreign languages, for taking drugs.

He admits that after becoming addicted to cocaine and heroin at 17, he became an armed robber to pay for drink and drugs. Living with his ‘black brothers’ on the streets, he was jailed in 2003, accused of playing a part in an attempted armed robbery.

Held on remand for nine months before being acquitted for lack of evidence, George claims his spell behind bars changed him. ‘It was hell on earth — literally,’ he tells me. ‘You either come out of there worse, or you change for the better. I changed. I wanted to help other people.’

Of course, George is not the only Obama sibling to have tried drugs. President Obama was a habitual drug-user in his teens and 20s. He tried cocaine. He was also a member of the ‘Choom Gang’ — slang for a group of dope smokers who used to drive round Hawaii getting stoned.

At college in Hawaii, Barack had regarded himself as a ‘cat’ — a cool character. Known as Barry, he was also notorious for ‘intercepting’ — grabbing a joint when it’s not your turn and taking a puff. The Honolulu Advertiser reported that Obama’s High School picture ‘prominently displayed?.?.?.?a package of ‘Zigzag’ rolling papers — used to make marijuana joints — and a matchbook.’

In Case You Missed It:  37-Year-Old Country Singer-Songwriter Dies Suddenly Just Hours After His Wedding
Posted in Tyranny and tagged Financial, Obama.

More than 30,000 people are expected to attend tonight’s screening of “Honor Flight” at Milwaukee’s Miller Park, which would break...