Egyptian President Mohammed Morsi said on Sunday that his decision to order the retirement of Egypt’s top generals and cancel a military order that had curbed his powers was not directed at individuals or embarrassing institutions. 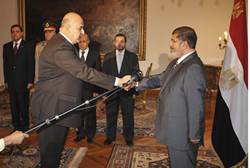 “The decisions I took today were not meant ever to target certain persons, nor did I intend to embarrass institutions, nor was my aim to narrow freedoms,” Morsi was quoted by Reuters as having said during a speech to mark the Muslim fasting month of Ramadan.

He added, “I did not mean to send a negative message about anyone, but my aim was the benefit of this nation and its people.”

Reuters reported that Morsi praised the work of the armed forces and said his decision would free them to focus on their military role.

Earlier on Sunday, Morsi sacked the entire leadership of Egypt’s defense establishment. Among the officials and officers fired are Defense Minister Mohamed Hussein Tantawi, and Chief of Staff Sami Anan.

The decision took Israel by surprise, but Israeli officials predicted that despite the latest developments, it is unlikely that a dramatic turnaround in terms of the Egyptian attitude to Israel will be seen in the near future.

In Case You Missed It:  Brazil’s uprising is just the first of many we will witness in 2023 as humanity awakens against TYRANNY
Posted in Israel, Terrorism and tagged Egypt, Freedom, Islam, Israel, Jihad, Military, Muslim Brotherhood, Palestinians, Terrorism.