Journalists are scratching their heads to figure out why Israeli and American leaders are leading a daily chatter of a military attack on Iran, but the flow of words may be a ruse to give Iran a double jolt as its deep fear that a cyber war can knock out its nuclear program prompts Tehran to try to setup a domestic Internet network. 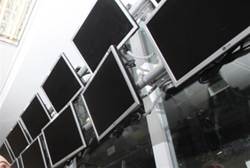 “The regime no longer fears a physical attack from the West,” Mahmoud Enayat, director of the Iran Media Program at the University of Pennsylvania’s Annenberg School of Communications, told The Wall Street Journal recently. “It still thinks the West wants to take over Iran, but through the Internet.”

A spate of cyber attacks, such as the Stuxnet and Flame virus and Malware, may have scared Iran more than the nearly daily threats from Israel that it will strike its underground nuclear installations.

Iranian cleric  Hamid Shahriari said in March, “We have identified and confronted 650 websites that have been set up to battle our regime – 39 of them are by opposition groups and our enemies, and the rest promote Western culture and worshiping Satan, and stoke sectarian divides. We are worried about a portion of cyberspace that is used for exchanging information and conducting espionage.”

Iran’s Ministry of Communications recently announced it would launch its own Internet and shut out uncontrolled web services, blocking Iranian from access to the rest of  the world.

In Case You Missed It:  Violent Mobs Targeted Jewish Communities When Rioting Broke Out

Rohrlich quoted Craig Labovitz, the co-founder and president of Ann Arbor, Mich.’s DeepField Networks and a former scientist at Microsoft, as saying, “The Internet really is not that hard to take down. I personally broke the U.S. Internet on a couple of occasions” by accidentally making a mistake in a code. He said the error caused him to “knock off most of the colleges and universities in America.”

Iran’s solution of creating its own “Halal”  Internet may hasten its demise because such a move could cripple its economy.

Eva Galperin, international freedom of expression coordinator at the Electronic Frontier Foundation, told Rohrlich, “Complete disengagement from the greater Internet is not politically or practically feasible.”

“It is doable, as the Iranian government controls all the ISPs in the country, but the potential costs are enormous,” she said. “By keeping them within the country, they maintain control… They’ve been working on a clone of Google Earth, a clone of Twitter, a clone of Facebook, which lets them surveil all the users. But if Iran would like to continue doing any form of international banking, for example, they need the Internet.”

Mahmoud Enayat of the Iran Media Program told the Minyanville writer, “The last time Iran blocked access to encrypted websites, there was a big debate in Parliament. One MP said, ‘We can’t access our Gmail while you’re doing this.’ And Khameini himself is on Instagram and Twitter.”

Global Times reporter Shu Meng wrote, “I’m sure a country like Iran can talk about replacing Gmail with its own mail service, but how many users inside the country will still tunnel out to Gmail? The question countries need to ask themselves is, if they want to get the US out of their back pocket, how much will it cost them to do it, and is it even technically feasible?”

Did Hamas have advance info about the Kerem Shalom attack?

Did Hamas have advance info about the Kerem Shalom attack? August 14, 2012 12:49 by Pesach Benson Everything you need...