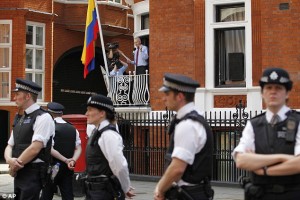 government’s ‘war on whistleblowers’ must end.

He also said he had taken a ‘stand for justice’ and praised the ‘courageous South American nation’ of Ecuador as he spoke from the balcony of its embassy in central London.

The 41-year-old was granted asylum by Ecuador on Thursday as he seeks to avoid extradition to Sweden, where he is wanted for questioning over sexual misconduct allegations.

Assange has been trapped in the embassy for almost two months without having been seen or heard from.

Hundreds of his supporters had gathered to listen to the Australian as well as vast amounts of global media. There was also about 100 police officers.

Assange made his speech from the safety of a small balcony at the Ecuadorian embassy knowing that if he stepped foot outside he would be arrested.

During the seven minute speech, he said: ‘As WikiLeaks stands under threat so does the freedom of expression and the health of all our democracies.

‘We must use this moment to articulate the choice before the government of the U.S. Will it revert to the values it was founded on or will it launch off the precipice dragging us all into a dark, repressive world in which journalists live under fear of prosecution.

‘I say it must turn back. I ask President Obama to do the right thing. The U.S. must renounce its witch hunt against WikiLeaks. It must dissolve its FBI investigation and it must vow that it will not seek to prosecute our staff or our supporters.

‘The. U.S. must pledge that it will not pursue journalists for shining a light on the powerful.

‘There must be no more foolish talk about prosecuting any news organsations. The U.S. administration’s war on whistleblowers must end.’

During his speech he also thanked Ecuador for granting him asylum.

He said: ‘I thank President Rafael Correa for the courage he has shown in considering and granting me political asylum.’

He also offered an apology to his family, saying: ‘To my family and my children who have been denied their father, forgive me . We will be reunited soon.’

It also emerged today that Assange has instructed his lawyers ‘to carry out a legal action’ to protect his rights.

His legal adviser Baltasar Garzon emerged from the Ecuadorian embassy in London before Assange spoke and said: ‘I have spoken to Julian Assange and I can tell you he is in fighting spirits and he is thankful to the people of Ecuador and especially to the president for granting asylum.

‘Julian Assange has always fought for truth and justice and has defended human rights and continues to do so.

‘He demands that WikiLeaks and his own rights be respected.

‘Julian Assange has instructed his lawyers to carry out a legal action in order to protect the rights of WikiLeaks, Julian himself and all those currently being investigated.’

Assange shot to international prominence in 2010 when his WikiLeaks website began publishing a huge trove of American diplomatic and military secrets – including 250,000 U.S. embassy cables that highlight the sensitive, candid and often embarrassing backroom dealings of U.S. diplomats.

As he toured the globe to highlight the disclosures, two women accused him of sex offences during a trip to Sweden. 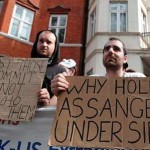 Outside the embassy today, Crowds chanted slogans such as ‘I am Julian’, ‘Julian Assange freedom fighter’ and ‘Only one decision, no extradition’ as Mr Assange came on to the balcony wearing a blue shirt, burgundy tie and dark trousers.

Militants from anti-capitalist movements such as Occupy and ‘hacktivist’ group Anonymous were present.

There was also a significant contingent of South American supporters chanting slogans in Spanish.

They carried placards with messages such as: ‘You Won’t Stop WikiLeaks – They Changed The World Already’ and ‘Free Press Free Assange’.

Tristan, an unemployed 29-year-old, has been camped out in front of the embassy since Thursday to show his support for Mr Assange and WikiLeaks.

‘I will be staying here for as long as it takes,’ he said after the speech.

‘I would like for the British Government to let him (Mr Assange) go to Ecuador or Sweden if the Swedish agree to their original terms and give a guarantee he will not be extradited.

‘He has already asked the Swedish authorities to come here to investigate, he is willing to defend himself against the allegations.

‘All he wants is an assurance he will not be extradited to America just for exposing the truth.’

Laura Mattson, a 29-year-old supporter from London, said she had been greatly impressed by Mr Assange’s words.

Asked whether she thought Mr Assange should face the accusations against him, she said: ‘Is it about the charges or is it about silencing WikiLeaks?

‘I think these allegations are just a way of getting to him.

‘I used to take WikiLeaks for granted but now things are getting very serious and I feel I must take a stand,’ she added.

Last night, the diplomatic row over Julian Assange escalated when the President of Ecuador warned Britain that any attempt to storm its embassy in London would destroy relations between the two countries.

Rafael Correa used his weekly address to the nation to deliver his strongest warning to Britain yet, describing the UK’s stance as ‘grotesque’ and ‘intolerant’.

He said if British police ‘violated Ecuador’s diplomatic mission’ in London it would destroy ties between the two countries.

The comments are likely to be welcomed on the streets of Ecuador, where anti-colonial feeling runs high. Meanwhile, the country’s position is attracting growing international support.

Assange has been trapped in the embassy for almost two months without having been seen or heard from.

Britain is adamant the WikiLeaks founder should be extradited to Sweden so he can answer sex charges, which he denies. But Assange and his supporters claim he should be allowed safe passage to Ecuador because its government has already granted him political asylum.

Assange, whose leaks have proved embarrassing for the US government, fears that if he is forced to return to Sweden he will be extradited to America, where his life could be in danger.

Last week, Ministers threatened to strip the embassy of its diplomatic status so police could storm it and arrest Assange. Sources believe the chances of that have diminished but insist Assange will be arrested if  he leaves the building.

Newest Hacker Target: Larger Systems That Run Everything Else

The “systems that control our systems” are now among the most lucrative targets for hackers. Control systems are the computer...