This week marks the anniversary of the last state to join the union, as Hawaii became the 50th state in 1959. In just three months, 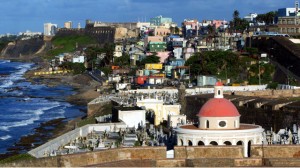 Puerto Rico faces a similar vote to become the 51st state of the United States.

And as of now, the results of its complicated statehood vote on November 6 are certainly up in the air.

Hawaii and Alaska (the 49th state) navigated a lot of political roadblocks to become states in the 1950s, since each state brought a pair of senators and a House member to Congress.

The Constitution is vague about the whole process of how a territory becomes a state, delegating the task to Congress.

In Article IV, Section 3, Congress is given the power to decide what states and territories are, but state legislatures would have to approve any act that would combine two existing states or form a new state from parts of other states. (So reuniting Pennsylvania and New Jersey, or Virginia, and West Virginia would be a very difficult task.)

And because any state automatically gets two U.S. senators and at least one member in the House of Representatives,  statehood becomes even trickier if the balance of power is close in Congress.

Alaska faced a decade-long battle with Congress to become the 49th state that ended in January 1959. Its voters had first passed a statehood referendum in 1946, but they lobbied for another decade with Congress to get their request for statehood approved.

Hawaii helped and also complicated the approval process for Alaska, but a congressional compromise was brokered. After a vote in Hawaii and a separate act approving Hawaiian statehood, it became the 50th state on August 21, 1959.

And now, there is the issue of statehood for Puerto Rico. The island is a U.S. territory and its residents are U.S. citizens, but they don’t have voting congressional representation.

So effectively, Puerto Rico residents can’t vote in the presidential general election. (Articles I and II of the Constitution says that only states can vote, and the 23rd Amendment extends voting rights to the District of Columbia.)

Another statehood referendum is set for Election Day, Tuesday, November 6, and the territorial governor, Luis Fortuno, is supporting statehood as the best option for Puerto Rico.

The 2012 vote is different because it has two parts. The first question asks voters if they want to move away from Puerto Rico’s territorial status.

The second part asks voters to choose three options other than remaining a territory:  becoming a U.S. state, an independent country, or a freely associated nation with legal ties to the United States.

To complicate matters, there are three major political parties in Puerto Rico, none of which align with the Democrats and Republicans–they are aligned to statehood, independence, and territory factions.

In a May 2012 poll,  the newspaper El Nuevo Dia found general confusion among potential voters.

But in a twist, polling data on this Sunday’s referendum in Puerto Rico on territorial constitutional changes didn’t match how people voted.

The vote is seen as a win for a third party that supports full independence for Puerto Rico.

On November 6, voter turnout will be high. Back in 2000, more than 80 percent of registered voters went to the polls. Puerto Rico residents vote at much higher rates than residents of the 50 states.

Back in 1998, voters in Puerto Rico were given four options: statehood, independence, a commonwealth, or none of the above. The majority picked “none of the above” as an option.

This time, a majority will need to pick statehood as an option if Puerto Rico’s quest to become a state will head to Congress.

The November referendum is a nonbinding resolution, but it could also take Puerto Rico down an unexpected path that could have wider political ramifications.

A tough economic climate in Puerto Rico is also a big factor in how the island will vote, in one of the most interesting subplots of Election Day.

By Scott Bomboy is the editor-in-chief of the National Constitution Center.

In Case You Missed It:  EXCLUSIVE: Ukrainian Woman, Inna Yashchyshyn, Who Impersonated a Rothschild at Mar-a-Lago Is Almost Certainly a Deep State Plant
Posted in Freedoms and tagged Election, Puerto Rico, Statehood, United Socialist States of America, US Citizen.

A major component of the Obama Administration’s regulatory crackdown on fossil fuels was struck down Tuesday by a federal appeals...