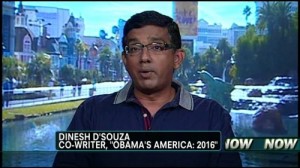 Box Office. What even more stunning about that is it’s playing in 1/3 less theaters across North American. Now this week, anti-Obama movie 2016 Obama’s America went into wider release and is opening right now in first place at the domestic box office. That’s quite a feat since the Rocky Mountain Pictures political documentary is still playing in only 1,090 North American theaters – or about 1/3 as many theaters as big-budget actioner like The Expendables 2 in 3,355 theaters.

Both online ticket-sellers Fandango and MovieTickets.com showed advance buying for 2016 Obama’s America were accounting for 35% to 28% respectively before this weekend.

The Movie is about what USA would look like in 2016 if Obama wins the 2012 Election. It tells how he won’t have to worry about reelection anymore and will be free do do as he pleases. What does he please, the writer of the movie shows us what Obama pleases as inspired by Obama’s father and written in Obama’s books “Dreams from My Father”.

The move tells a story of Obama rooted to Socialism, and anti-Colonialist attitudes. He is anti-Western and feels USA benefited off looting from the more impoverished third word like Kenya, or Indonesia. It shows how little we know about him. Here is the trailer:

The Author Dinesh D’Souza speaks about the Barack Obama Movie 2016, who is Barack Hussein Obama?

Posted in Tyranny and tagged Election, Obama, Socialism, US Citizen.

On the idealistic side, Barack Obama’s executive amnesty for 1.9 million children of illegal alien border crosses looks like a...