Toronto police have arrested a Jew who shoved back a Muslim who punched him for not moving his “unclean” dog further away from Muslim women during an anti-Israel rally. The Muslim was neither arrested nor questioned. 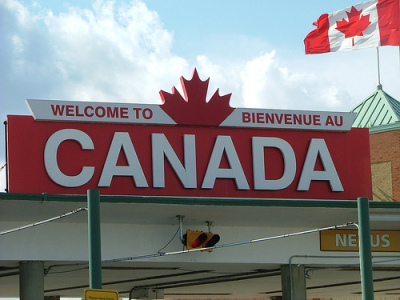 Allan Eintoss showed up at the annual Al Quds rally to register his disapproval of the celebration’s call for destroying Israel, The Toronto Sun reported.

He took along his therapy-trained dog “Cupcake,” draped with an Israeli flag while other Jewish protesters were told to put away their Israeli flags because they were “inciting” Muslims waving Palestinian Authority flags.

After two Muslim women asked him about his dog, Eintoss refused a demand by a Muslim man that he move away because, they said, he was “not allowed to go near our women.”  As he walked away, another demonstrator punched him in his chest, prompting Eintoss to shove him back.

Police stepped in and one officer blamed him for being so insensitive as to bring a dog to an Islamic rally, while other policemen promptly handcuffed him and carted him away on charges of incitement to riot and assault. He was freed after agreeing to leave the area.

Eintoss is considering legal action against the police by demanding a public inquiry into the arrest.

“Insensitivity” to Muslims has been in fashion lately.

Individuals have been accused of blasphemy or of insulting Islam for speaking ill of Allah, finding fault with the prophet Mohammed, drawing a picture and speaking against Islamic leaders in some Muslim countries, according to Wikipedia.

Two months ago, a world renowned Turkish classical pianist was charged with insulting Muslim values in comments posted on Twitter and quoting a well-known poem by an 11th Century Persian poet who ridiculed the hypocrisy of people pretending to be pious.”

The Family Security Matters website has reported, “In an effort to counter ‘Islamophobia’ in British schools, teachers now are required to teach ‘key Muslim contributions’ such as Algebra and the number zero’ in math and science courses, even though the concept of zero originated in India.”