Louis René Beres (Ph.D., Princeton, 1971), is Professor of Political Science and International Law at Purdue. The author of many major books and articles in the field, including some of the very earliest publications on Israeli nuclear strategy, he was Chair of Project Daniel (Israel, 2003). 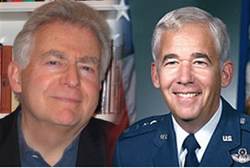 Sometimes, the scholar, the soldier, and the diplomat can learn from the playwright.

“Do you know what it means to find yourselves face to face with a madman?” inquires Luigi Pirandello’s, Henry IV. “Madmen, luck folk, construct without logic, or rather with a logic that flies like a feather.”

In the unpredictable theatre of modern world politics, a real-life drama that can routinely shudder with absurdity, decisional constructions that are based on pure logic can collapse before madness. Moreover, if enemy madness and nuclear weapons should happen to coincide, an affected country’s resultant misfortunes could quickly become intolerable.

Still, even now, amid the ongoing strategic drama of Israel versus Iran, there is no compelling or convincing evidence that key decision-makers in Tehran are “mad.” Of course, irrationality is not the same condition as madness, and pertinent Iranian leaders might still meet the usually accepted criteria of an irrational or non-rational state. Here, however counterintuitive, Iran’s leaders could choose, at least on occasion, to value certain preferences more highly than national survival, yet maintain a consistent and transitive rank-ordering among these key preferences.

In all likelihood, both operationally and diplomatically, the window of Israeli preemption opportunity is already closed. Nonetheless, even in the absence of an effective eleventh-hour Israeli and/or American defensive first-strike against Iran, Israeli security would not necessarily suffer an irremediable or existential setback. Although an irrational Iran might not be responsive to the more orthodox strategic threats of retaliatory destruction, it could still remain subject to other relevant threats.

For Israel, this now implies, inter alia, a core obligation to (1) carefully and comprehensively identify such alternative threats, and (2) fashion this unorthodox hierarchy of alternative threats into a purposeful deterrence policy.

Undoubtedly, by “choosing” to forego anticipatory self-defense against Iran, the legal equivalent of a permissible first-strike, Israel could have to live with protracted uncertainty. After all, “coexistence” with an already-nuclear Iran could mean having to endure under a constant threat of devastating Iranian nuclear attack.

It is, in fact, with just such a bitterly unacceptable prospect in mind, that Israel has been steadily expanding and upgrading the country’s critical active defenses.

Technically, judging from the most recent tests, everything appears entirely “on track.”

At the same time, no matter how promising the interpenetrating Israeli protection systems and their components happen to be, there are urgent reasons for MOD/IDF never to become too dependent upon active defense. This is because no system of ballistic missile defense (BMD) can ever be dependable enough to preclude or minimize a core strategy of deterrence. Even with the very best deployable systems of ballistic missile defense, there may be too-high levels of “leakage.” This actionable conclusion becomes especially obvious in those emotionally hard-to-imagine cases where incoming warheads would be biological and/or nuclear.

Israel must move, conspicuously, to strengthen its historically ambiguous nuclear deterrent. In order to be dissuaded from launching an attack, any rational adversary, and possibly also an irrational one, would first need to calculate that Israel’s second-strike forces were sufficiently invulnerable to any considered first-strike aggressions. Facing Israel’s Arrow, this adversary would likely require increasing numbers of missiles, in order to achieve an assuredly destructive first-strike capability.

Over time, however, this adversary could still undermine the critical deterrence benefits of Israel’s active defenses. It would achieve this valuable “efficiency” simply by adding regular rocket increments to its own arsenal of offensive missiles.

Israel must continue to develop, test, and implement a missile interception capability that will best match the enemy threat. It must also take prompt and even innovative steps to enhance the credibility of its still-ambiguous nuclear deterrent. If, as expected, Iranian nuclearization should continue to proceed unobstructed, Israel will then have to prepare, expeditiously, and among other things, to remove its bomb from the so-called “basement.”

In such palpably unstable circumstances, any continuing posture of deliberate nuclear ambiguity would simply cease to be reasonable or rational.

We may presume that Israel already has a secure and penetration-capable nuclear force.

This second-strike capacity, hardened and dispersed, should now be made more recognizably ready to inflict an unacceptably damaging retaliatory salvo. As any exclusively “counterforce” targeting posture could have major deterrence shortfalls, Israel’s primary nuclear targets must generally be identifiable enemy cities. From the standpoint of optimally enhancing nuclear deterrence, it may also be time for Israel to release certain carefully selected information about its sea-based retaliatory forces.

There is more. Israel must clarify that Arrow and its other corollary active defenses would always operate simultaneously with Israeli nuclear retaliations. This point is incontestable. Iran must be made to understand that, where appropriate, Israel’s defensive deployments would never supplant, or even render less probable, an Israeli nuclear reprisal.

Iran should never have been allowed to proceed this far with its illegal military nuclearization. Now, in consequence, Israel will have to deal with a uniquely hostile enemy regime by instituting steady enhancements of both its nuclear deterrence and active defense capabilities. Although the prospect of regime-change in Tehran might at first appear desirable and perhaps even compensatory, such an actual leadership transformation could ultimately offer Israel little more than a transient illusion of enhanced security.

Conceivably, in fact, a successor regime in Tehran could prove more worrisome for Jerusalem, and also for Washington. Indeed, examined from the all-important perspective of blatantly annihilatory Jihadist inclinations, Ahmadinejad and his current clerical masters may still not represent the most dangerous possible expression of an Iranian national leadership. Sometimes, we may witness, truth is starkly counterintuitive.

In the matter of enemy delivery systems, Iranian nuclear harms could be directed toward Israel, not only via direct missile strike, but also by terrorist-proxy platforms. These platforms could include cars, trucks, and boats. Should a newly-nuclear Iran ever decide to share certain of its weapons-usable materials and/or scientific personnel with Hizbullah in Lebanon, Israel might then have to face a heightened prospect of nuclear terrorism. The multiple perils posed in this scenario could also impact American cities.

Soon, leaders in Israel and the United States will no longer be able to “kick the Iranian nuclear can” down the road. More than likely, however, in their now too-long delayed tactical calculations, the preemption option will finally have to be rejected. Unassailably, in time, this controversial option will simply have become demonstratively more costly than gainful.

What’s left? The “good news” is that deterrence, even of an enemy state that might sometime not value its physical survival above all other relevant values, could still work. For Israel, successfully deterring a possibly irrational nuclear adversary in Tehran need not be judged out of the question. Irrationality, we should recall, is not the same as madness.

As we have already noted, an irrational Iranian adversary might still display a consistent and transitive hierarchy of preferences. Almost certainly, the very top of any such preference ordering would reveal the thoroughly immutable religious expectations of Shiite Islam. Significantly, in particular circumstances, no-longer-rational leaders in Iran could plausibly calculate that the overriding theological benefits of any long-term peace with Israel would plainly exceed the expected costs.

It is possible, and perhaps even probable, that, for the foreseeable future, authoritative Iranian leadership elites will remain entirely rational, thus valuing their country’s physical survival more highly than any other preference, or combination of preferences. Here, Iran would remain subject to the very same “normal” threats of retaliatory destruction that ordinarily affect other rational states in world politics. While there can never be any absolute guarantees of such a distinctly preferred scenario, it is also be premature to conclude that a newly-nuclear Iran, whether rational or irrational, would lash out viscerally, at Israel, or at its other enemies.

In the interminably high-stakes drama of world politics, irrationality is not the same as madness. It follows that even an irrational Iranian nuclear regime might not lie outside or beyond the ordinary calculations and readily determinable consequences of Israeli nuclear deterrence. An intransigent Tehran could still confront Israel with the intimidating aspect of incessant belligerence, but this could be substantially less ominous than offering Jerusalem the indecipherable and utterly indifferent face of genuine madness.

Despite the change in power in France and German Chancellor Angela Merkel's open support for former French president Nicolas Sarkozy...