Despite the change in power in France and German Chancellor Angela Merkel’s open support for former French president Nicolas Sarkozy in the recent French presidential elections, she has been quick to patch up relations with Sarkozy’s successor Francois Hollande and to establish a common position with regard to Greece. 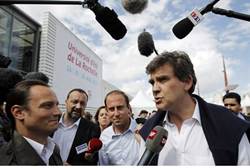 The two countries, however, appear to be taking a different course on the issue of nuclear energy.

Merkel quickly embraced the protest against nuclear energy following the calamitous events in Japan and Germany,  is phasing out its nuclear reactors and betting heavily on renewable energy. The paradox is that until Germany has ramped up its supply of energy from green environmentally friendly sources, it must make up the shortfall by buying electricity from France – generated by nuclear energy – or coal produced energy from Poland. Germany, however, has a clear direction.

Across the border in France, the debate is still raging and touched off acrimony within the government coalition when the French Ecologists protested a statement by the Minister for Re-industrialization, Arnaud Montebourg, on nuclear energy. Montebourg stated: “For my part, I consider nuclear energy as an industry of the future.”

If the Germans had made the choice of phasing out nuclear power, Montebourg noted, other European countries, including Great Britain, had decided on the opposite course and continued to invest in nuclear energy.

Montebourg is in charge of bringing factories back to France and to do so he needs cheap power “Our choice to have inexpensive, reasonably priced and plentiful energy is a strategic one.” Nuclear energy is seen as a trump card that would allow France to build up her industry. Additionally, the export of nuclear reactors was a French industry that Montebourg does not want to abandon.

Such a presentation of nuclear energy alarmed the French Ecologists and one of their leaders, Noël Mamère, called it a “provocation” in a radio interview, and claimed that such a position called into question the coalition agreement with the Socialists. The Ecologists took particular exception to describing nuclear power as an industry of the future when, from their point of view, it is an outmoded technology.

Montebourg reminded the Ecologists that he was merely adhering to the policy enunciated by President Hollande during the election campaign that was essentially the same as the one offered by Sarkozy: France would modernize her nuclear industry while diversifying her sources of energy.  Cécile Duflot a cabinet minister representing the Ecologists attempted to calm things down by saying that what counted were actions and the honoring of coalition agreements rather than a statement by this minister or the next.

Palestinians Don’t Own Their National Movement Like They Used To

Palestinians Don’t Own Their National Movement Like They Used To August 27, 2012 17:12 by Pesach Benson Everything you need...