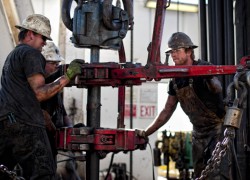 While our manufacturing facilities have made progress in becoming more energy efficient over the past several decades, there is an opportunity to accelerate and expand these efforts with investments to reduce energy use through more efficient manufacturing processes and facilities and the expanded use of combined heat and power (CHP). Instead of burning fuel in an on site boiler to produce thermal energy and also purchasing electricity from the grid, a manufacturing facility can use a CHP system to provide both types of energy in one energy efficient step. Accelerating these investments in our Nation’s factories can improve the competitiveness of United States manufacturing, lower energy costs, free up future capital for businesses to invest, reduce air pollution, and create jobs.

President Obama’s EO goes on to state that manufacturers are under-investing in energy efficiency and that public investment in efficiency upgrades will encourage private investment to capture this low-hanging fruit. While technological advancements do often improve efficiency, those investments should not be subsidized by the taxpayer, much less selected by Washington bureaucrats. Businesses and consumers will make these decisions, weighing preferences and considering trade-offs.

When the federal government invests money to promote private-sector efficiency spending, these are likely investment businesses would have made regardless. Using taxpayer dollars merely offsets a part of that investment. And if a homeowner chooses not to invest in new window panes or a business executive does not buy a new boiler, he does not believe the benefits outweigh the costs. Or, families and businesses have monetary constraints and believe the money is better spent elsewhere.

Businesses do not need public investment to improve efficiency and cut costs; they make those investments regularly with their own money for the very reasons stated in President Obama’s EO: to save money and improve their competitive advantage.

If President Obama wants to help America gain a competitive advantage in manufacturing, he should work with Congress to open up federal lands and waters to oil and gas production. The amount of natural gas production in the U.S., occurring largely on private and state-owned lands, is making this country an attractive place to do business, especially for energy-intensive industries.

In what could be a growing trend, Royal Dutch Shell recently announced plans to build a petrochemical plant in western Pennsylvania and cited the proximity to natural gas production as the reason for the location. The $2 billion plant will create 10,000 construction jobs and thousands of permanent jobs for Beaver County, Pennsylvania. A new KPMG analysis of the U.S. chemical industry emphasizes that “[w]ith a new and abundant source of low-cost feedstock, the US market has transformed to become one of the most advantageous markets for chemical production in the world.”

President Obama can help American manufacturers without the help of the taxpayer. Opening access to America’s energy sources and prohibiting onerous and duplicative regulations will create jobs, grow our economy, lower energy prices and bring in much needed state and federal revenue.

Why Does MSNBC Want to Go Backwards?

Who knew that telling people they have rights would be so controversial? In his nationally televised address Wednesday night, Representative...