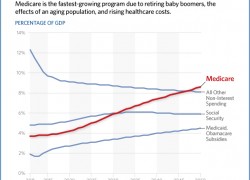 Medicare is getting quite a bit of attention lately. And rightly so.

Out-of-control entitlement spending contributes directly to long-term federal deficits, which will accelerate over the course of the next few decades, according to Heritage’s Federal Budget in Pictures and figures provided by the Congressional Budget Office.

By 2030, Medicare alone will surpass other entitlement programs like Social Security, Medicaid and Obamacare. Before 2050, Medicare will exceed all other non-interest spending portions of the federal deficit. The program’s expansion will continue as more and more Baby Boomers retire and the U.S. population ages.

With the combined entitlement spending alone gobbling up all federal tax revenue by 2045, all additional spending will add to burgeoning federal deficits.

Learn more about Heritage’s ideas for reform in Saving the American Dream.

New research continues to show that marriage is connected to longer life. A new study from researchers at Michigan State...