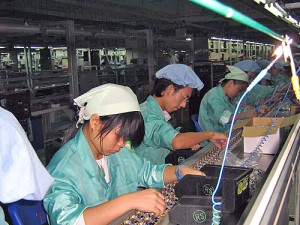 BEIJING — China’s manufacturing sector shrank in August for the first time in nine months, according to government data released over the weekend, in yet another sign that the Chinese economy is slowing just as its leaders prepare for a delicate power transfer this fall.

The next several weeks are crucial for policymakers as they weigh how to respond to a steady drumbeat of disappointing economic numbers. Economic growth has slowed for six straight quarters and exports have dropped sharply as consumers in European Union countries pull back their spending.

The Chinese real estate market has also experienced bumps in recent weeks. New home sales in August were down 5.7 percent compared with July across 54 cities, according to a report released Monday by the market research group of the major property broker Centaline.

Expectations are running high that the national government will step in to revive the economy, just as it did after the 2008 financial crisis. This week, President Hu Jintao is slated to give a speech on the state of China’s economy at a meeting of leaders of the Asia-Pacific Economic Cooperation forum in Russia. According to a report from the official Xinhua News Agency, he will propose building more infrastructure to generate growth.

But many economists say there is a limit to how much the country can depend on public spending to boost its economy.

“They cannot rely on it forever,” said Zhang Zhiwei, chief China economist at the investment bank Nomura. “It’s more of a short-term solution. It’s just buying time for them to roll out structural reforms.”

Chinese government officials have said that in the long run, they would like the country’s economy to rely less on exports and investment and more on domestic consumption. But when faced with a slowdown in gross domestic product growth, the government has found that the quickest fix is to build as much as possible.

Starting in late 2008, immediately after the financial crisis, Chinese officials unleashed a $4 trillion stimulus to fund the construction of railways, airports, bridges and numerous other projects.

Some observers contend that the country ended up undertaking too many projects and backing too many industries for which there was no demand. Industries such as solar-panel manufacturing, shipbuilding and steel trading are imploding because they can’t find enough customers.

Now, with Europe struggling and the U.S. economy still sluggish, China’s manufacturers are having trouble selling their goods.

The manufacturing figure, called the purchasing managers’ index, dropped to 49.2 in August from 50.1 in July, according to the government data released Saturday. A number above 50 means that manufacturing activity grew. Below 50 means manufacturing has contracted.

More numbers are due in the coming weeks, and analysts fear they will also show the economy has yet to hit bottom. Next week, figures on industrial production and exports will be released.

In October, all eyes will be on the country’s third-quarter GDP rate. With so many sectors slowing down, some see a risk that China will not hit its 7.5 percent growth target for the year just as a new raft of leaders assume power.

Zhang says new leadership, though, could bring a bigger response.

“We’re getting close to the leadership transition,” Zhang said. “After the transition, the government will probably be more proactive.”

Posted in Financial and tagged China, Economy, Financial, Made in China, Recession.

Members of the Russian female punk band Pussy Riot, who have become international celebrities as victims of Russian “justice,” on...