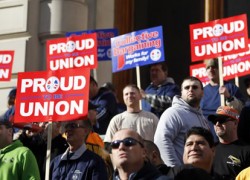 This election year, millions of Americans will donate to the political candidates and initiatives of their choice at the local, state, and federal levels. But for unionized workers, union dues come out of their paychecks and go to political causes—and they aren’t consulted on where that money will go.

In July, The Wall Street Journal’s Tom McGinty and Brody Mullins published an eye-opening report that “Organized labor spends about four times as much on politics and lobbying as generally thought.”

They broke down the unions’ political spending from 2005 to 2011: $1.1 billion “supporting federal candidates through their political-action committees, which are funded with voluntary contributions, and lobbying Washington, which is a cost borne by the unions’ own coffers.”

But that was only the beginning. Add to that another $3.3 billion for political activity from “polling fees, to money spent persuading union members to vote a certain way, to bratwursts to feed Wisconsin workers protesting at the state capitol last year.” Who pays for this? The workers, McGinty and Mullins report: “Much of this kind of spending comes not from members’ contributions to a PAC but directly from unions’ dues-funded coffers.”

Despite findings that 60 percent of union members object to their dues being spent on political causes, this practice continues. Why?

In the 27 states without right-to-work laws, many unions are able to put clauses in their contracts that allow them to fire workers who do not pay union dues. If a worker wants to work for a unionized firm, he or she is forced to join the union and pay the dues, which can run from several hundred to several thousand dollars a year.

In a new paper, Heritage’s James Sherk gives an example of this rule at work: “The United Auto Workers (UAW), which organized General Motors’ Michigan factories in 1937, is a case in point. Michigan does not have a right-to-work law, so union-represented workers must pay the union’s dues or get fired.”

Notice the year there—1937. The workers coming on the job in 2012 are bound by a vote taken by their ancestors, essentially. “General Motors’ current employees never had the chance to vote for or against the UAW. UAW representation was a non-negotiable condition of their employment.”

Sherk argues that these rules make no sense for today’s workers. Just 7 percent of private-sector union members voted for the union that represents them, and the vast majority of government unions organized at least 30 years ago. The workers inherit the representation of yesteryear, which negotiates their terms of pay, promotion, layoff, and retirement.

Once organized, unions remain indefinitely. Naturally, that gives union leaders little reason to be accountable to their members in any way—they’re not going to have to stand for re-election.

To give unionized workers the freedom they deserve, Sherk says, this system should end.

Congress and state legislatures should at the least require government and private-sector unions to stand for re-election. Re-election votes every two to four years would allow employees to regularly assess their union’s performance as their representative.…

An even better reform would be to give workers representative choice—allowing individual employees to choose who represents them, irrespective of who other employees select. This would remove the union’s monopoly over the workplace, allowing employees to negotiate contracts tailored to their needs.

Workers should have the freedom to choose whether they want union representation or not. And if they do want to join a union, they should be able to choose which union they join. This freedom would give them more say over paying union dues in the first place, and how those dues are used. It would also give them the opportunity to negotiate merit-based raises, which unions do not allow.

This clip to help promote the informative documentary film "I WANT YOUR MONEY". The full documentary is at http://www.IWantYourMoney.net. If...