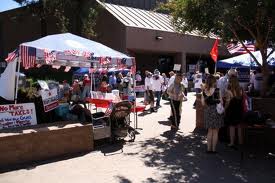 In 2010, the Tea Party was one of the main reasons why the Republicans took control of the House and elected many Governors and Senators. The Tea Party (in my opinion) is a great asset to the Republicans and it is very essential to a victory in 2012. The media used to make the Tea Party look awful, but more and more people understand what they stand for. The Tea Party is a simple idea, one that most people would be okay with. The idea is standing up for what our amazing Founding Fathers stood for. If our Founding Fathers looked at us right now, they would be disappointed. We are spending what we don’t have, we are slowly removing Christian and family values and most of all some are losing their pride in this great country of opportunity. People are worried sick of what could happen to this great nation if things aren’t changed.

The left and some of the right are looking at this too deeply. The Tea Party believes we need to stop raising taxes and stop spending what we don’t have. They also believe it is essential there are no more bailouts and that our government stays small and stays out of people’s lives.

What so many people seem to ignore, is that the Tea Party’s beliefs, are quite original. As in, 250 years older original, they mirror the views of the founding fathers.

The Tea Party rallies are very motivating as well. My Aunt, who is a swing voter but usually votes Democrat, went to a Tea Party rally I spoke at and she thought it was a great event. My Aunt thought the Tea Party was crazy before she went, but when she left she had a totally different view. She loved how patriotic and entertaining it was. She is now a supporter of the Tea Party.

The Tea Party is essential to a victory in November as well as 2014 and 2016. This election is the most important one we will ever see and we need all the help we can get. Marco Rubio, Wisconsin Governor Scott Walker and most recently Ted Cruz & Richard Mourdock (primary) would not have been elected if it weren’t for the Tea Party. Tea Party rallies bring Republican and Independent voters together and pump them up for a victory. The rallies generate many new voters and volunteers. Those people are the make it or break it for a victory.

The Tea Party has done a great job publicizing Obamacare and its negative effects. The Tea Party noticed immediately that Obamacare was an abomination to our Constitution and our Founding Fathers. They were the first to realize Obamacare was going to hurt our Medicare system.

The last reason why the Tea Party is essential is because of its positivity. It is so amazing how negative both sides are at a time like this. The Tea Party is a peaceful, respectful and they use facts instead of attacks. The Liberals and their OWS mobs constantly attack and attack time and time again. Unfortunately their attacks are not truthful and don’t include facts. The Republican Party needs to follow the Tea Party by replying to the false attacks by using facts about the Obama administration that will hit hard with voters. The difference between Tea Party rallies and Liberal rallies is that the Tea Party is positive there as well. I really believe the Tea Party helps the Republican Party. If you think the Tea Party hurts us, think again.

In Case You Missed It:  Cancer expert says U.K. seeing spike in "non-covid deaths," nobody willing to call out vaccine elephant in the room
Posted in Freedoms.

Border Security Alone Not Enough to Stem the Tide of Violence

The Texas Department of Agriculture has launched an online video campaign aimed to “shame” the federal government into enhancing U.S....