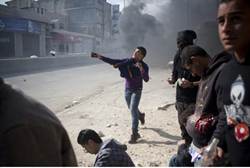 Residents of the Jewish village of Esh Kodesh reported that the assault began when three men from the community were walking in one of the town’s vineyards on Saturday afternoon, during the Jewish Sabbath.

The men were attacked by a large Arab mob armed with clubs and sticks, residents said. The attackers apparently came from the nearby PA town of Kotzra.

A security team from Esh Kodesh was called to the scene, as were nearby IDF units. The responders encountered hundreds of PA men armed with rocks and other makeshift weapons, and were unable to stop the assault.

“Children in the village are crying,” community spokesman Aharon Katzuf told Tatzpit. “They can’t sleep because of the screams of ‘Yitbach al Yahud’ [Slaughter the Jews – ed.] and ‘Allahu Akbar.’”

As of Saturday night clashes continued. An IDF spokesperson said, “Security forces are at the scene, and the circumstances are being investigated.”

Is Obama’s Push for Food Stamp Spending Contributing to Inflation?

Wherever the government injects money in a specific industry, prices artificially climb quickly and a bubble of some sort ensues,...