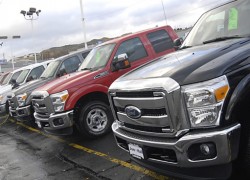 President Obama’s auto bailout is being touted as a great success of his Administration. Speaking in Detroit at a Labor Day rally, Vice President Joe Biden used it to explain how Americans were better off. “Osama bin Laden is dead and General Motors is alive,” Biden boasted.

There is a story that President Obama and these others are not telling—the story of the 20,000 workers who lost nearly all of their pensions because the Obama Administration chose not to protect them. Let Freedom Ring released a video highlighting this story.

In 2008, candidate Obama said that pension protection was a “top priority.” But Heritage’s James Sherk, who wrote about the bailout in June with George Mason University law professor Todd Zywicki, explained how union workers benefited from the bailout while the non-union employees at Delphi, an auto parts manufacturer and former GM subsidiary, weren’t as fortunate.

When Delphi filed for bankruptcy the maximum pension benefits were $54,000 a year for retirees aged 65 and above, with lower benefits for early retirees. About half of Delphi’s union and non-union workers faced reductions in their pension benefits [if the plan was terminated and transferred to the Pension Benefit Guarantee Corp.

The termination would normally mean pension cuts for both Delphi’s union and non-union workers. However, the United Auto Workers’ members got special treatment. According to Heritage’s James Sherk:

The left, led by President Obama, is touting this as one of the biggest successes of the Obama Administration, but where is the success? It was successful for the United Auto Workers and their special interests, but not many others. Especially not for Delphi’s nonunion retirees.

Democrats Ran Their Convention Like They Run The Country: At A Deficit

On Friday, Bloomberg News reported another embarrassing fact about the recently completed Democratic National Convention: it operated at a $15...