On the 11th anniversary of Sept. 11, 2001, as the nation reflected on its losses, families will gather at the new 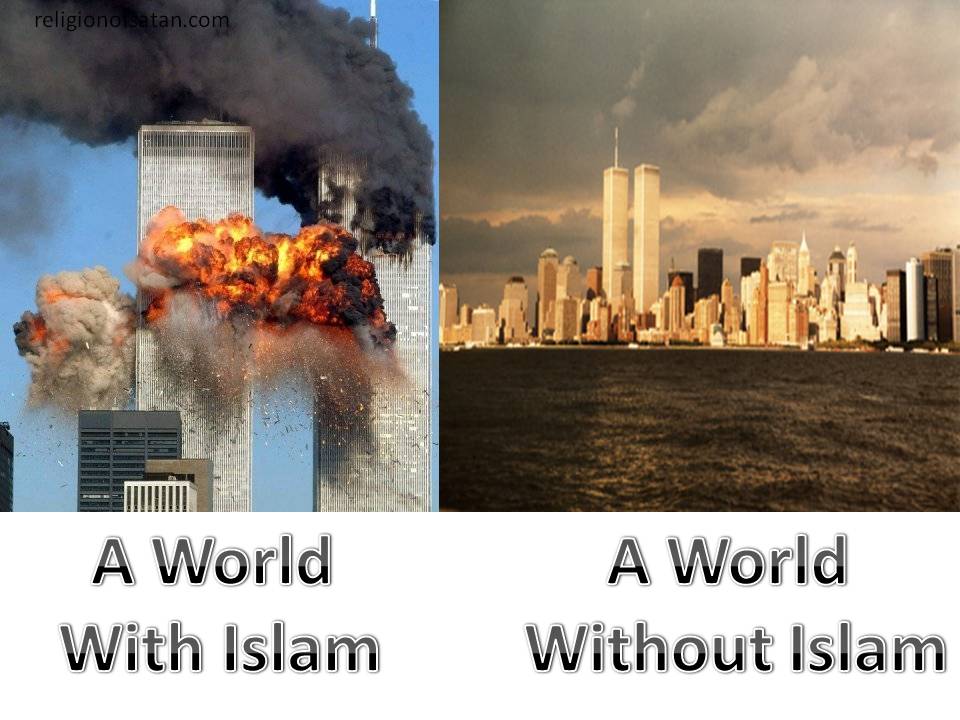 World Trade Center rising in Lower Manhattan, at the Pentagon and on a field of wildflowers in Pennsylvania to commemorate nearly 3,000 killed on that infamous morning when jetliners were turned into missiles and a new age of Islamic terrorism was born.

Eleven years ago today, Islamist filled with hate trained in Islamic death camps of Afghanistan, brainwashed by the Qu’ran were on a mission to murder Americans for Allah. They boarded jetliners, with box cutters in their carry-on’s and evil filled in their hearts.

What started as a normal day, clear skies in Manhattan, to a Boeing 767 filled with jet fuel destined for the west coast in the distance appearing all to close to the city then before we knew it impacting the towers. The Black-box found recorded the chants of “Allah Akbar” filled the cockpit seconds before impact.

The indelible images of the twin towers smoking and disintegrating into the street of Manhattan, of innocent people falling and jumping as if living our worst nightmare. We did not know why someone would do this, most of us did not know what Islam was about that day. As the skyline of Manhattan changed forever, to this day people go back to New York and shocked by the missing towers once so prominent in the skyline, a blunt reminder that Islam is here.

The unbelievable happened, death into the thousands, others hurt and the emotional scars as well. As we watch in horror to think others across the sea in a sandy desert are cheering in joy over the murder and death of the creations of God. People so callous where human life is not cherished, and death celebrated.

We hear the perpetrators are Muslims, we watch again in horror as we see some dancing on the street celebrating the deaths in parts of the Islamic world. We wonder why, and who are these people, why do they celebrate such evil?

We learned in the coming days the terrorist were inspired to murder those 3,000 people that day by a religion called Islam, founded by a warlord whom killed many himself his name was Mohammad. He teaches his followers to not take Christians are Jews as friends, he killed those that would not follow his ways. New York city was now a victim of a 6th century ideology of Arabia.

How quickly some forget the roots to this evil, while others make up stories and try to blame this act too on the Jews. Less than 10 years later Muslim try to erect a mosque called the Cordoba down the street from where the towers fell, an insult to humanity! Why the Spanish name Cordoba and not an Arabic name? When he search for the answers we see that Cordoba was the name used when Muslim conquered Spain with brutal force in the Battle of the Basque, they converted a massive Christian Church into a Mosque to celebrate this conquest, its name Cordoba.

If any good came out of that day, it was nationalism came alive, liberal or conservative for the next six months we were just Americans and proud. Our eyes were opened to an evil we could never have imagined, we could not comprehend minds filled with so much hate that would want to kill innocent civilians and celebrate those acts. We came to the realization of the evil perpetrated in the world always seemed afar was now in our own backyard.

“We shall never forget“, the words seen often on bumper stickers and T-shirts, but have we forgotten? Have we forgot this is a very old war, the west vs Islam. Have we forgot why a 15th Century fresco of Mohammed at the San Petronio church in Bologna Italy displicts Mohammad as the devil with a pitchfork, or why the Spanish to this day in many Spanish villages such as the fiesta in the quaint village town of Bocairent blow up dummies representing the Mohammed to celebrate their freedom from Islamic rule. The fact that Islam tried to conquer and force Islam on westerners for over a thousands years. Storming cities as as Constantinople, and later onto the gate of Vienna in a force to occupy and force Islam on the people of Europe.

God Bless the people whom perished on September 11 2001, may we never forget the reason for their deaths and allow them to be forgotten.

Executive Orders in Cybersecurity Result in Incomplete and Empty Solutions

Over the weekend, a draft of a cybersecurity executive order was shown to members of the press. Leaked reports of...