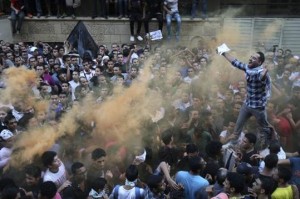 Egyptian rioters scaled the walls of the U.S. embassy

CAIRO (Reuters) – Egyptian protesters scaled the walls of the U.S. embassy in Cairo on Tuesday and pulled down the American flag during a protest over what they said was a film being produced in the United States that insulted their Prophet Mohammad, witnesses said.

In place of the U.S. flag, the protesters tried to raise a black flag with the words “There is no God but Allah and Mohammad is his messenger”, a Reuters reporter said.

Once the U.S. flag was hauled down, protesters tore it up, with some showing off small pieces to television cameras. Then others burned remains.

“This movie must be banned immediately and an apology should be made … This is a disgrace,” said 19-year-old, Ismail Mahmoud, a member of the so-called “ultras” soccer supporters who played a big role in the uprising that brought down Hosni Mubarak last year.

Many Muslims consider any depiction of the Prophet to be offensive.

Mahmoud called on President Mohamed Mursi, Egypt’s first civilian president and an Islamist, to take action. Many others were supporters of Islamist groups.

About 20 people stood on top of the embassy wall in central Cairo, where about 2,000 protesters had gathered.

A U.S. embassy official had no immediate comment on the protesters’ actions but the embassy had put out a statement earlier on Tuesday condemning those who hurt the religious feelings of Muslims or followers of any other religions.

“We firmly reject the actions by those who abuse the universal right of free speech to hurt the religious beliefs of others,” the U.S. embassy said in its statement.

One slogan scrawled on the walls of the embassy, a fortress-like structure that is near Tahrir Square where Egyptians revolted against Mubarak, said: “If your freedom of speech has no limits, may you accept our freedom of action.”

An Egyptian state website carried a statement by Egypt’s Coptic Orthodox church condemning what it said were moves by some Copts living abroad “to finance the production of a film insulting Prophet Mohammad”.

About a 10th of Egypt’s 83 million people are Christians.

It was not immediately clear which film angered protesters.

However, according to the website www.standupameriaus.org, the Christian Pastor Terry Jones, who angered Muslims by burning a copy of the Koran, was due to take part in an event on Tuesday called “International Judge Mohammad Day” in Florida in which it would symbolically put the Prophet on trial and play it out live over the Internet.

“Respect for religious beliefs is a cornerstone of American democracy,” the U.S. embassy statement said, adding that it condemned the efforts by “misguided individuals” to hurt the feelings of Muslims.

In another incident prompted by similar sentiments last month, a lone man attacked the German embassy with homemade nail bombs and a hammer with which he cracked glass at the entrance, following a report about a protest in Germany where demonstrators bore caricatures of the Prophet outside a mosque.

One American has been reported killed

In Case You Missed It:  “I Want America to Wake Up and Pay Attention, Something Aint Right!” – Silk Describes How Her Sister Diamond ‘Died Suddenly’ in Her Kitchen (VIDEO)
Posted in Terrorism and tagged Egypt, Islam, Muslim Brotherhood, Muslims, Terrorism, United Socialist States of America.

(Reuters) - German Finance Minister Wolfgang Schaeuble questioned on Tuesday how the United States could deal with its high levels...