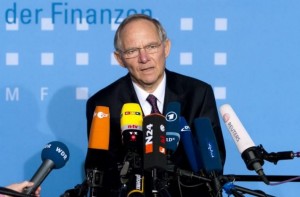 (Reuters) – German Finance Minister Wolfgang Schaeuble questioned on Tuesday how the United States could deal with its high levels of government debt after November’s presidential election.

In a speech to the Bundestag lower house of parliament to open a debate on the 2013 German budget, Schaeuble said worries about U.S. debt were a burden for the global economy, hitting back at Washington which has criticized Europe for failing to get a grip on its own debt crisis.

In private, German officials often express concern about U.S. debt levels and the inability of politicians there to reach a consensus on how to reduce it, but Schaeuble’s public remarks underscore the extent of the worries in Germany.

“Ahead of the election in the United States there is great uncertainty about the course American politics will take in dealing the U.S. government’s debts, which are much too high,” Schaeuble said.

“We need to remind ourselves of that sometimes and the global economy knows that and is burdened by it.”

A weak economy and political gridlock in Washington have prevented meaningful debt reduction in the United States, which has run budget deficits topping $1 trillion for three straight years.

The issue has become a central theme of the U.S. election campaign with Republican candidate Mitt Romney accusing President Barack Obama of fiscal mismanagement, and the White House slamming Republicans in Congress for blocking government efforts to get the U.S. fiscal house in order.

Last year, U.S. lawmakers reached an 11th hour deal to increase the Treasury Department’s borrowing authority, which had bumped up against a legal limit, averting an unprecedented default.

But Treasury Secretary Timothy Geithner has said the United States is likely to hit a $16.4 trillion borrowing limit by the end of the year.

The Paris-based Organisation for Economic Cooperation and Development (OECD) has warned against a sharp fiscal retrenchment in the United States, saying this could derail the fragile recover there.

Unless politicians agree on a plan, a wave of U.S. spending cuts and tax hikes – dubbed the “fiscal cliff” – are set to take effect in January, within months of the November 6 election.

German Chancellor Angela Merkel has established a close relationship with Obama and they are of one mind on many foreign policy issues. But members of her conservative party have welcomed the Romney campaign’s focus on debt reduction.

A crowd of Salafi Islamists swarmed over the walls of the U.S. Embassy in Cairo today, tore down the American...