Several dozen Muslims from the Islamic Movement in Israel held a quiet protest outside the U.S. Embassy in Tel Aviv Thursday. 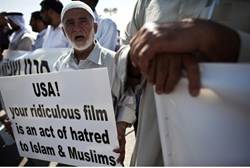 Meanwhile, Arab members of the Israeli Knesset joined the Islamic choir of condemnation against a U.S.-made film that depicts Muslim prophet Mohammed in a negative light. Nationalist MKs warned that the Arabs are trying to stir up violence.

MK Taleb A-Sana (Raam-Taal) called the film “an abomination” and the head of his faction, MK Ahmed Tibi, said it was intended “to light fires of hatred against the backdrop of surging Islamopohobia in the West.”

Nationalists in the Knesset took the opportunity of reminding their Arab counterparts that the movie falls under the category of freedom of expression which they themselves often invoke to justify offensive publications and films.

“Tibi and his friends have forgotten that they are supposed to represent the citizens of Israel and continue to function as emissaries of terror organizations,” said MK Alex Miller (Yisrael Beytenu). “Through their actions, they continue their habit of incitement, and their utterances could lead to a reality like the one in Libya,” he warned. “Unfortunately, their hypocrisy is rampant, and I did not hear them denounce the films that are made against the citizens of Israel.”

“As those who always preach equality and democracy, I remind them that freedom of artistic expression is an integral part of democracy,” he added.

MK Yariv Levin (Likud) said earlier that Tibi and A-Sana “are trying to incite the Arab public and light a flame of religious war in Israel.”

“It is time to kick out of the Knesset those people for whom incitement and treason have become their central activities,” he added. “They bear direct responsibility for any incident of violence that could occur as a result of their words. The Attorney General must take immediate steps against them before they continue their acts and cause a serious wave of violence.”

Rockets Fall In Israel But Where’s the Coverage?