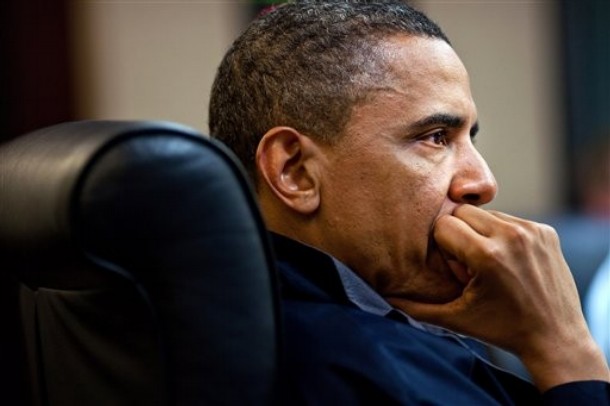 challenge yet to efforts to keep the Arab Spring from morphing into a new wave of anti-American radicalism – and Obama has few good options to prevent it from spiraling further out of control.

Less than two months before the U.S. presidential election, a spate of terrorist attacks on embassies in Libya, Egypt and Yemen poses a huge dilemma for the U.S. leader who took office promising a “new beginning” with the Muslim world but has struggled to manage the transformation that has swept away many of the region’s long-ruling dictators.

On top of that, even as Obama tries to fend off foreign policy criticism from Republican rival Mitt Romney, Obama is grappling with an escalating crisis in U.S.-Israeli relations over Iran’s nuclear program and increased bloodshed in Syria, where President Bashar al-Assad has defied international calls to step aside.

Obama’s Middle East woes deepened this week with a series of terrorist attacks on U.S. diplomatic compounds and the assassination of America’s ambassador to Libya. Demonstrators were incensed by a U.S.-made film they consider blasphemous to Islam.

With the White House fearing further violence in the region after Muslim prayers on Friday, Obama and his aides were scrambling to re-calibrate their approach to the problem. Warnings were issued to Muslim governments around the world that they would be expected to help protect U.S. interests.

All of this may simply point to a larger challenge that will endure well beyond November’s U.S. vote – an apparently growing gulf between the United States and increasingly assertive Islamist forces within the Middle East.

The irony is clear.

With his vaunted 2009 speech in Cairo, Obama had hoped to “reset” relations with the region and ease some of the ill feeling stoked by the 2003 U.S.-led invasion of Iraq and “war on terror” rhetoric of Obama’s Republican predecessor, George W. Bush.

The Obama administration was caught flat-footed by a wave of pro-democracy revolts last year that toppled autocratic leaders – some, like Egypt’s Hosni Mubarak, a longtime U.S. ally. But Washington gradually gave cautious backing to the goals of the Arab Spring movement.

Now, with much of the U.S. optimism that accompanied the Arab world’s uprisings seemingly gone for good, Washington faces an apparent rise in Islamic activism and declining influence over countries it once counted as allies.

“There are a lot of moving parts and it’s important not to make too many generalizations,” said Hayat Alvi, lecturer in Middle Eastern studies at the U.S. Naval War College. “But it does seem that the politics are getting more complicated as we go forward, not just in the region but also here in the United States.”

Within the Islamic region, Obama remains much more popular than many predecessors. But scenes of U.S. embassy property being trashed first in Cairo and then Yemen in anger at the film insulting the Fasle Prophet Mohammad were potent reminders that potentially violent anti-Americanism remains very much alive.

The most serious attack killed U.S. Ambassador Christopher Stevens and three of his colleagues in the eastern Libyan city of Benghazi – a city overthrown last year from the late dictator Muammar Gaddafi’s forces by Western air power backed by Obama during Libya’s civil war.

While Libya’s government was swift to condemn the attack there and pledged to work with the United States to find those responsible, it was the equivocal initial response from Egypt’s new President Mohammad Mursi – condemning the video but not the Egyptian mob – that infuriated Washington.

Obama pointedly told the Spanish-language network Telemundo that Egypt’s Islamist-led government should not be considered a U.S. ally, “but we don’t consider them an enemy,” he added. Obama later spoke to Mursi and delivered a blunt message that Egypt must cooperate in protecting American diplomatic facilities.

The White House will be watching closely to see that Mursi follows through. At stake may be the fate of $2 billion a year in foreign aid, much of it for the military, that the United States gives Egypt, a source close to the U.S. administration said.

“The Egyptian authorities can’t play any sort of a double game here,” said Ari Ratner, a former Obama administration appointee, Middle East expert and now fellow at the Truman National Security Project. “If the government of Egypt still expects to get significant American aid and investment, (it needs) to be very clear on the unacceptability of these events and actively work to calm the situation.”

Mursi, however, may feel he has little choice. Like the government of Pakistan, also often accused of a “double game,” he must walk an awkward path between the superpower whose support he needs, and extremists – or even simply regular voters – in his country with strong religious or nationalist views.

That those leading the United States have their own political pressures is clear.

The speed that the diplomatic mission attacks became politicized highlights the domestic dangers for Obama whatever he does, particularly with Romney accusing him of “apologizing for America”.

Romney faced his own backlash at appearing to play politics with the issue, with pundits across the political spectrum accusing him of opportunism during a national tragedy for exposing Obama administration of pandering and apologizing to terrorist..

Clearly feeling the pressure, Obama kept up his defense of his failed Middle East policy on Thursday and sought to prevent public opinion from turning against him on the issue.

“Now I know that it’s difficult sometimes seeing these disturbing images on television because our world is filled with challenges,” he told a campaign rally in Colorado. “This is a tumultuous time we are in. But we can and we will meet those challenges if we stay true to who we are.”

At the very least, the events of this week will deepen the already-profound caution over getting further involved in Syria, underlining misgivings about allowing rebels there to get more sophisticated and lethal weapons.

“The U.S. is not going to jump into the fray in Syria,” said Alvi, of the U.S. Naval War College. “Even before the attacks in Benghazi and Cairo, they were gun-shy.”

KHARTOUM (Reuters) - Sudanese terrorist now broke into the German embassy in Khartoum on Friday, raising an Islamic flag and setting the building on...