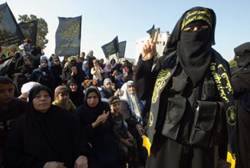 For the last few days we’ve seen the blame for the escalating violence in the Middle East assigned to everything from a fake movie trailer that most of the rioters have never seen and will never see to Western powers finally putting a stop to the ongoing Islamist run genocide in the Sudan. No one has yet placed the blame for this round of mayhem where it truly belongs and that is with Islam itself.

I am purposefully not using the made up terms “Islamism” or “Islamo-fascism” or any other word designed to give the impression that Islamic militants are some sort of blasphemous cult working in secret enclaves hidden from the innocent, peaceful Muslims of the world. The truth is that it is the moderate Muslims who wish to live in peace with the rest of the world that must hide themselves in Islamic cultures for their own safety. We have sat back and watched for decades while “moderate” Muslims – those who the West pins the hope of peace upon – have been marginalized and in many cases exterminated while treacherous, barbarous warmongers have taken control of almost every Muslim country in the world and Muslim communities within the Western world.

How does that happen? Only when we accept that there is something fundamentally wrong with mainstream Islamic theology and culture can we understand why “radicals” are empowered by it. Islam has never undergone a Reformation and the Islamic world has never had an Enlightenment, but we continue to interact with the Islamic world as if both those things have happened. We act as if the average Muslim on the streets of Cairo or Tripoli has the same reverence for freedom and individual rights as the rest of us. But this simply isn’t true.

No other religion or cultural group reacts with such uniform and savage violence to even mild criticism. No group demands the right to insult, demean and destroy other cultures without consequence the way the Muslim world does. Let’s pretend for a minute that the Islam apologists are right and that this current madness was all caused by a YouTube video. Why would we accept that kind of behavior from Muslims?

Arab Muslim television and media routinely depict Jews drinking the blood of children and stealing their organs. Have Jews taken to the streets worldwide to besiege the embassies of Muslim countries and murder their diplomats?

In 2002 Muslims fleeing IDF forces shot their way into the Church of the Nativity, where Christians believe Jesus Christ was actually born. The Muslims urinated and defecated in the church, used Christian holy books as toilet paper and stole sacramental equipment. I don’t recall seeing Christians go on bloody rampages after the desecration of one of their most holy shrines.

When the Taliban destroyed cliff-side statues of the Buddha that were over 1,700 years old I didn’t see Buddhists murdering Muslims in retaliation.

Hindus and Sikhs are often the targets of Muslim violence yet there are no worldwide Hindu or Sikh riots where embassies are burned and their personnel slaughtered. But we accept and have come to expect this behavior from Muslims.

No other religion creates as much chaos and anarchy as Islam. And that chaos is not limited to Muslim countries, but we see it in Europe and increasingly here in America where Christians were recently stoned by a Muslim mob in Dearborn, MI. The idea that a tiny minority of extremists is committing all the Muslim violence in the world may be comforting, but it simply isn’t true. There is something within Islam itself that encourages this barbarity in significant portions of any Muslim population.

Every mainstream school of thought in Islam teaches anti-Semitism, misogyny, racism and Arab Imperialism. There are no voices in the Islamic world that promote Liberty or the Republican ideals that all Americans believe in. Modernist Muslims like Dr. Zuhdi Jasser are isolated and marginalized not only in the Islamic world, but in the West where politicians have been co-opted by Jihadist organizations like the Muslim Brotherhood. Until that changes there will never be peaceful co-existence between Muslims and non-Muslims.

So let’s have an honest conversation about Islam. It is in the best interest of America and the West that the Islamic world be a civilized partner in a global community. Right now the Islamic world is not civilized and the political and theological leaders of that region sanction and support uncivilized behavior. That being the case, what can we do to secure future peace for our children?

We must create the conditions in the Middle East for an Enlightenment to begin in the Islamic world. We can no longer afford to be so afraid of being called colonialists or imperialists that we don’t export our superior values to the rest of the world. We will never be able to placate Muslims no matter how much of our freedom we’re willing to give up, as the experience of non-Muslims in the Muslim world demonstrates. Muslims must be dragged out of the darkness of the 7th century and into the light of modernity whether they like it or not. The alternative is to live in a state of constant conflict until the rest of the world wearies of the violence and goes to war.

In a “surprise” move, Texas announced last Thursday that it would seek a No Child Left Behind (NCLB) waiver from...