In so doing we’ll be killing two birds with one stone. 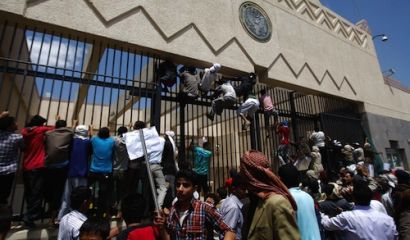 WASHINGTON — Allow me to offer a suggestions as to how our government might avoid the slaughter of our personnel in diplomatic installations around the Islamic world by mobs.

It seems to me most probable that insults to the Prophet Muhammad appear regularly in the modern world. After all, insults against revered figures in the world’s other major religions pop up all the time. As for Islam, a book such as Salman Rushdie’s Satanic Verses can be published anywhere. A thirteen-minute anti-Islamic video can arrive on YouTube, and my guess is there are others that have and will appear there. In some obscure land, far from the major media, a cartoon is published perhaps with the Prophet in an absurd pose. Why not a simple slur on Facebook? Who can control Facebook? Will a slur found there set off the mobs next time? And what constitutes a slur? These Islamic mobs keep changing their standards. What was a minor lapse of taste yesterday becomes a cause for terrible indignation today.

The metamorphosing angers of Islam have been a feature of the modern world for decades. Possibly the first show of anger was in Tehran with the takeover of the American embassy. But I trace Islamic anger back further, at least to Sirhan B. Sirhan, who assassinated the 1968 presidential candidate, Robert F. Kennedy, for some fancied transgression. From all I can tell, the angers of Islam are getting worse. Even with the presidency of Barack Obama, the Nobel Laureate, the angers of Islam have worsened. He began his presidency tendering the olive branch of peace to Islam. Now the Islamic world is afire. Mobs are burning our diplomatic installations in places where moderate Islam reigns, for instance, Tunisia. In Libya unspeakable desecrations take place against us. Egypt seems to be out of control, and Egypt is supposedly an ally and recipient of foreign aide.

The rest of world seems to be going forward toward prosperity. Even countries like China, India, and Russia are proceeding into the future. Islam, at least in Arab lands, is going backwards. It is doing something I would have thought preposterous in decades past. It is heading back toward the Middle Ages and embracing that time and earlier times with open arms. I think some day we will recognize it as the season following the vaunted Arab Spring.

Yet back here in America the news is not all that bad. For one thing, we are approaching energy independence. Thanks to an abundance of recently discovered natural gas, we may in the years ahead be shipping it abroad. Also, thanks to “fracking” we can extract oil from long dead oil wells and from newer ones. If President Obama will just get out of the way, we are going to be energy independent and our independence will last for years. The angers of Araby will be inherited by the Chinese and the Indians. I, for one, will enjoy seeing how China handles the murder of Chinese diplomats and the torching of Chinese embassies.

For with energy independence we can close our embassies in lands where they are endangered or perhaps stand as a provocation to the passing mobs. In the modern world, diplomatic business can be carried on in civilized countries rather than in dangerous backwaters. We can treat a Libyan or Tunisian envoi in Geneva, Switzerland or possibly in New York at the United Nations complex. Diplomats from those countries would still be free to visit New York City. It would be a shame, if civilized citizens of Islam could no longer line up at our embassies or consulates for visas to the United States, but such is life. If there was business to be transacted, the businessmen could always transact it on the telephone or, for the advanced, the Internet.

Probably there would not be much business transacted once we are energy independent. The world would be a more peaceful place. The forward-marching nations would be happy and contented in the 21st century. The Islamic nations would be happy or angry or whatever in the 10th century, possibly earlier. They could reside in any century the chose. If an Arab potentate wanted heart surgery, he could fly off to foreign parts for the procedure. And if an indigenous mob wanted to go wild, its members could burn down the local Chinese embassy. Again, it will be interesting to see how the Chinese respond to such madness.
About the Author

R. Emmett Tyrrell, Jr. is the founder and editor in chief of The American Spectator. He is the author of The Death of Liberalism, published by Thomas Nelson Inc. His previous books include the New York Times bestseller Boy Clinton: the Political Biography; The Impeachment of William Jefferson Clinton; The Liberal Crack-Up; The Conservative Crack-Up; Public Nuisances; The Future that Doesn’t Work: Social Democracy’s Failure in Britain; Madame Hillary: The Dark Road to the White House; The Clinton Crack-Up; and After the Hangover: The Conservatives’ Road to Recovery.

Official: Iran Behind Int’l Terror & May Aim for USA; How Long Does America Wait to Defend Itself, World?

Iran’s Revolutionary Guards’ Quds Force terrorists and their proxies are behind recent attacks on U.S. officials and may soon try...