Anti-Islam videos posted earlier this year sparked only a shadow of the lethal rage over the “Innocence” film, indicating that Al Qaeda and other terrorist groups have been behind inciting violent Muslim demonstrations and terrorist attacks. 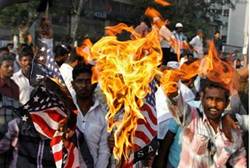 Muslim demonstrators burn U.S. flags during a protest against the ‘Innocence of Muslims’ film

All of the videos, seen below, were produced professionally, but the extremely amateurish “Innocence of Muslims” video that has been cited by media as the cause of the past week’s Muslim rage already has recorded more than 10 million clicks.

Veteran journalist and former Newsweek senior editor Arnaud de Borchgrave wrote this week that the blame for the violence is not the “Innocence” video but is more likely Al Qaeda and other terrorist cells, which “are alive and ready to kick in when the opportunity arises.”

The anti-American violence is not due to the amateurish film but can be traced to a growing hatred of the United States, as expressed recently by the same U.S. Army advisors who trained them “with some $200 million worth of jet fighters and attack helicopters destroyed in a heavily fortified allied base in Afghanistan by Taliban guerrillas disguised in U.S. military uniforms.”

He added that the last “11 years of fighting have strengthened rather than weakened the Islamist enemy.”

The United States implicitly has built up expectation in the Arab world, but de Borchgrave wrote, “Recent explosions have demonstrated yet again that the Arab world isn’t on a glide path to Western-style democracy.”

Similarly, he dismissed the idea of a Palestinian Authority state as did Republican presidential Mitt Romney did this week, writing, “Another hard to escape conclusion is that the creation of a Palestinian state in the West Bank is more mirage than even distant possibility.”

Ironically, mainstream media the past year have considered the Oslo Accords “peace process” a dead duck but roundly put a negative spin on Romney’s saying virtually the same thing.

A news video that garnered less than 8,500 hits on YouTube last June of Christians protesting at the Arab International festival in Dearborn, Michigan was “Islam Is a Religion of Blood Murder,” a statement made by the leader of the anti-Islam demonstration. There were no worldwide or even local Muslim attacks following the video, which can be seen below.

The video, also below, was part of his department’s anti-terrorism training, and Kelly issued an apology for showing it after local Muslims expressed outrage – but no riots.

The same month, the American Center for Law and Justice (ACLJ) produced a trailer entitled “The Export: Radical Islam’s Map to the End of Democracy” and tied radical Islam with the Iranian nuclear threat.

It caused no reaction among Muslims and was seen by less than 2,500 people.

Iran has accused the IAEA of reporting information that allowed “terrorists” to cut electricity to centrifuges at its Fordow nuclear...