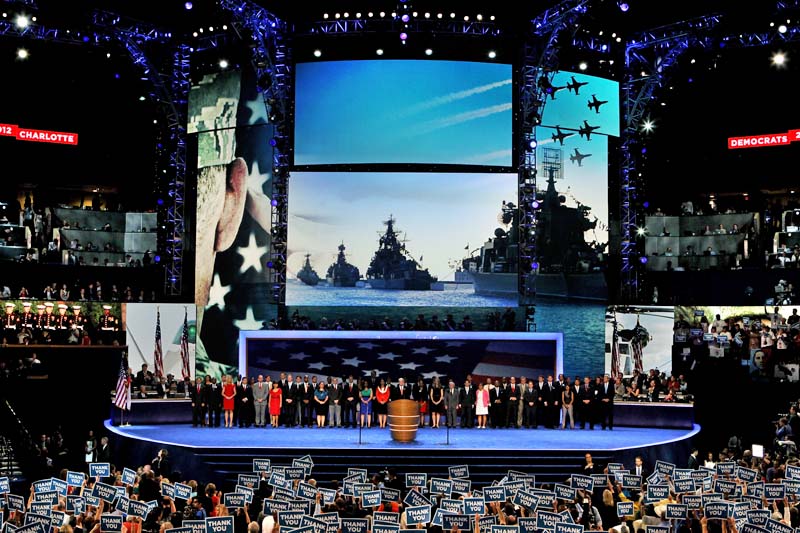 On the last night of the Democratic National Convention, a retired Navy four-star took the stage to pay tribute to veterans. Behind him, on a giant screen, the image of four hulking warships reinforced his patriotic message.

But there was a big mistake in the stirring backdrop: those are Russian warships.

While retired Adm. John Nathman, a former commander of Fleet Forces Command, honored vets as America’s best, the ships from the Russian Federation Navy were arrayed like sentinels on the big screen above.

These were the very Soviet-era combatants that Nathman and Cold Warriors like him had once squared off against.

“The ships are definitely Russian,” said noted naval author Norman Polmar after reviewing hi-resolution photos from the event. “There’s no question of that in my mind.”

DNC apologizes for use of Russian ships

Naval experts concluded the background was a photo composite of Russian ships that were overflown by what appear to be U.S. trainer jets. It remains unclear how or why the Democratic Party used what’s believed to be images of the Russian Black Sea Fleet at their convention.

A spokesman for the Democratic National Convention Committee was not able to immediately comment Tuesday, saying he had to track down personnel to find out what had happened.

The veteran who spotted the error and notified Navy Times said he was immediately taken aback.

“I was kind of in shock,” said Rob Barker, 38, a former electronics warfare technician who left the Navy in 2006. Having learned to visually identify foreign ships by their radars, Barker recognized the closest ship as the Kara-class cruiser Kerch.

In Case You Missed It:  WATCH: Women Detained by Police for Wearing Bikinis on Beach

“An immediate apology [from the committee] would be very nice,” Barker said. “Maybe acknowledge the fact that yes, they screwed up.”

The background — featured in the carefully choreographed hour leading up to the president’s Sept. 6 speech accepting the Democratic Party’s nomination — showed four ships with radar designs not used in the U.S. fleet.

For example, the ship in the foreground, on the far right, has a square radar antenna at the top of its masthead. That is the MR-700 Podberezovik 3-D early warning radar, commonly identified as “Flat Screen” for its appearance, a three-dimensional early warning radar mounted on the Kerch, said Eric Wertheim, editor of “Combat Fleets of the World.”

Similarly, the third ship has a MR-310 “Head Net” air search radar, shaped like two off-set bananas, at its masthead and is mostly likely the guided missile destroyer Smetlivyy. The first two ships seem to be Krivak-class frigates, but it’s hard to discern from the silhouette, experts said.

But the fact they are Russian ships is not in doubt. In addition to the ship’s radar arrays and hulls, which are dissimilar from U.S. warships, the photo features one more give-away: a large white flag with a blue ‘X’ at the ships’ sterns.

Polmar, who authored “The Naval Institute Guide to the Soviet Navy,” recognized the blue ‘X’-mark: “The X is the Cross of St. Andrew’s, which is a Russian Navy symbol,” Polmar said. (An anchored U.S. warship, by contrast, flies the American flag on its stern.)

Based on this specific group of these ship types, one naval expert concluded that this was most likely a photo of the Black Sea Fleet.

In Case You Missed It:  Black Leaders Rally to Save DC’s Lincoln Park Statue

“Ships are all Black Sea Fleet,” A. D. Baker III, a retired Office of Naval Intelligence analyst, told Navy Times after looking at the image. “These four ships, at the time the photo was taken, constituted the entire major surface combatant component of the Black Sea Fleet,” Baker said, noting the photo was likely to be six years old or older. (The Kerch is now on the list to be scrapped, Baker said.)

Barker, the former sailor who first spotted the errors, believes the seven aircraft streaking by are F-5 jets, a trainer used by the U.S. Navy. Asked to explain how he reached that conclusion, the former airplane spotter ticked off a list: “Twin engine, single rudder, with hard points on the wingtips, with that silhouette is going to make them F-5s.”

This afternoon, the House voted to restore the work requirements that the Obama Administration has attempted to gut from the...