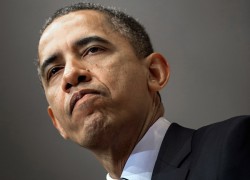 I have my own doubts about Barack Obama’s birth certificate, but we can’t worry about that right now. Almost every day I see a post on Facebook, Twitter or another social media outlet about Obama’s “fake” birth certificate.

First off, it has been proven-according to sources-that he was born in Hawaii. Although the fact may be skewed, those are the facts. We doubters have hardly any proof at all that he was born out of the United States. Before we bring up this issue again on a national level, we need to have conclusive evidence of a fake birth certificate.

Obama’s birth certificate is not the major issue affecting our country right now. We need to stop attacking Obama on silly things like this along with where he went to college. Instead, we should be attacking him on the facts. Obama has led us down a path of destruction in his first four years in office. Like all of you know, he has raised our debt over $5,000,000,000,000 since taking office. That’s a lot of money, isn’t it? Our economy is getting worse, our jobs numbers are disgusting and we are on our way to another economic collapse. Many voters are not educated on the issues. Most people don’t know that Obama is required to create a budget every year. What is mind blowing is that President Obama has not gotten one vote from either party in the House OR Senate on his budgets. He also has used too many executive privileges, as well as creating Obamacare and other big-government bills. I hate to say it, but Obama is leading our country down a path to being a Socialist nation. Does it scare you? It scares me too. We need to be pushing these facts instead of Obama’s birth certificate.

I believe if the majority of voters were educated, the Republican Party would not only get the youth vote every election, but every age group. Citizens fought for many years, especially women, to have the chance to vote and now we are putting our country in jeopardy because we are uneducated. Many voters do not know the facts I just listed.

Now back to Obama’s birth certificate. I really don’t think it would change the outcome of the election if we had more evidence that he was born out of the country. The Occupiers, the protestors, the far left and the uneducated could be told that Obama was a murderer and they would still vote for him. Obviously Obama is not, but that is the battle ahead.

This battle will be a hard one, but we have the facts on our side. Obama’s birth certificate won’t make a difference in 2012 and we need to stop making that one of our main issues. We have the facts on our side. We have a great bold Conservative leader along with one of the smartest Americans paired up to defeat this far left agenda. With our country’s future in jeopardy and a man with a Socialist agenda in office, we cannot afford to lose this election. Let’s educate the voters on the facts and win this thing in November!

Gallup Poll today put Obama and Romney at a dead even tie, both at 47%. These are the results when...