The Pakistani government sought to distance itself on Monday from the government minister who offered a $100,000 cash reward to anyone who kills the maker of the anti-Islam film that has been widely accused of sparking the protests throughout the Muslim world, saying the offer doesn’t represent official government policy. 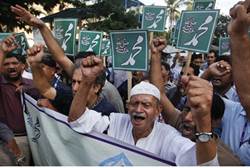 Protests in Pakistan against anti-Islam film

While many in the predominantly Muslim country welcomed the offer made by Haji Ghulam Ahmad Bilour, the country’s minister of railways, the foreign ministry in Islamabad made it clear, just hours after President Asif Ali Zardar landed in New York for the UN General Assembly meeting, that he bounty offer reflected Bilour’s “personal view and had nothing to do with the official policy of the government of Pakistan.”

Bilour said on Saturday that he would pay the reward money out of his own pocket and called on al Qaeda and the Taliban to continue striving toward the “noble cause” of eliminating the filmmaker.

The film, entitled “Innocence of Muslims,” has enraged Muslims around for its portrayal of the Prophet Muhammad as a fraud, a womanizer and a child molester.

Approximately 50 people, including the U.S. ambassador to Libya, have been killed in violent protests that the Arab world claims were ginited in response to the amateur video, despite such allegations being unfunded and merely a timely excuse to renew the bloodshed.

On Friday, Pakistan observed a national holiday, which it termed the “Day of Love for the Prophet,” and called on people to go out on the streets to peacefully protest against the anti-Islam film.

The demonstrations turned violent, however, resulting in the death of at least 21 people. Protesters set fire to government and public property including a church and several cinemas.

Batter Up: What’s on Deck for the Supreme Court’s October Term 2012 Term

While other events may compete for our attention this fall (baseball playoffs, football, national election campaigns), next Monday, October 1,...