The Prime Minister of Canada, Stephen Harper, will meet with his Israeli counterpart Binyamin Netanyahu Friday in New York City. 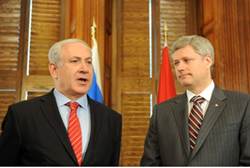 Harper is in town as the UN General Assembly convenes but he will not address the assembly himself. Instead, his foreign minister John Baird will deliver a speech to the assembly Monday.

Harper was invited to New York by the Appeal of Conscience Foundation, which will bestow upon him the title of the World’s Leading Statesman in a ceremony Thursday. So reports Canadian-Jewish newspaper Shalom Toronto.

Harper and Netanyahu are expected to discuss Iran’s nuclear weapons project. Since Harper’s election in 2006, Canada is considered to be Israel’s closest ally. Official Canadian spokesmen have emphasized Canada’s commitment to Israel’s security, and Harper has said that Israel’s enemies are also Canada’s.

Canada stood by Israel after the Second Lebanon War and Cast Lead campaigns. It has recently broken off its diplomatic relations with Iran.

As Spain and Greece Burn, Estonia Offers a Lesson

A fire bomb explodes behind a riot police squad on September 26 in Athens, Greece, during clashes with demonstrators. (Photo:...