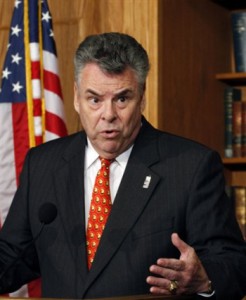 Rep. Peter King called for the resignation Friday of U.S. Ambassador to the United Nations Susan Rice for initially saying that the deadly Sept. 11 assault on the U.S. Consulate in Benghazi, Libya, was spontaneous.

“I believe that this was such a failure of foreign policy messag[ing] and leadership, such a misstatement of facts as was known at the time … for her to go on all of those shows and in effect be our spokesman for the world and be misinforming the American people and our allies and countries around the world, to me, somebody has to pay the price for this,” the chairman of the House Homeland Security Committee told CNN.

In a Friday statement, Director of Public Affairs for National Intelligence Shawn Turner sought to explain the change that eventually lead President Barack Obama to say the attacks were terrorism and “not a mob action.”

“In the immediate aftermath, there was information that led us to assess that the attack began spontaneously following protests earlier that day at our embassy in Cairo. We provided that initial assessment to executive branch officials and members of Congress, who used that information to discuss the attack publicly and provide updates as they became available. Throughout our investigation we continued to emphasize that information gathered was preliminary and evolving,” Turner said.

Senate Foreign Relations Chairman John Kerry (D-Mass.) defended Rice late Friday in a statement, saying, “I’m deeply disturbed by efforts to find the politics instead of finding the facts in this debate… I’m particularly troubled by calls for Ambassador Rice’s resignation. She is a remarkable public servant for whom the liberation of the Libyan people has been a personal issue and public mission.”

Ari Fleischer said on CNN that Rice should keep her job.

“Susan Rice said something she should not have said,” the former spokesman for President George W. Bush said. “I don’t know if she was just being loose. I think the Obama administration has a history of underplaying threats to the United States, for example the underwear bomber, but I’m uncomfortable with this talk of resign because of what she said.”

Days after the attack, Rice was adamant that the attack, which left Ambassador Chris Stevens and the three other Americans dead, was a “spontaneous” reaction to the protests at the U.S. Embassy in Cairo, Egypt, which may have been sparked by the anti-Islamic film “Innocence of Muslims.”

“But our current best assessment, based on the information that we have at present, is that, in fact, what this began as, it was a spontaneous — not a premeditated — response to what had transpired in Cairo,” Rice said at the time.

Of the twenty new or higher taxes in Obamacare, below are the five worst that will be foisted upon Americans...