Israel will be victorious over Iran, with or without the help of the United States, says Chief Rabbi Metzger, who asked Jews to focus on good relations with others. 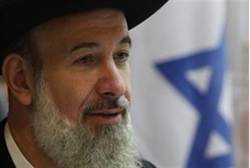 Speaking in a special Erev Yom Kippur with Arutz Sheva, the Chief Ashkenazi Rabbi pleaded for Jews “to be careful to observe mitzvos relating to others” and not just those between Man and G-d.

He reminded Jews that “Repentance, Prayer and Charity” overcome the “evil decree” and cited the victory of the Jews in ancient Iran (Persia) over the wicked Haman who plotted to destroy all Jews and in the end fell as a victim of his own trap.

Rabbi Metzger quoted Isaiah 1:18, where the prophet tells Jews that by repenting, their sins “although they are like scarlet, shall be as white as snow [and] they are red like crimson, they shall become like wool.”

He said people can be an influence on the world by “good behavior to others, family, spouses and friends.”

“The day before Yom Kippur,” he added, “our enemy threatens us as with all of his audacity and chutzpah. The president of Iran, a descendant of the wicked Haman, stands in front of the world at the United Nations and openly states that we have no right to exist, G-d forbid.”

“It is written in our prayers that prayer, repentance and charity can overturn the evil decrees, and we pray as Jews did in the days of Haman. The decree exists but it will be turned on its head and Jews will overcome their enemies. The People of Israel will be victorious, with or without the United States.”

While Iranian President Mahmoud Ahmadinejad reportedly toned down his usual anti-Semitic and anti-Israel rhetoric in his annual speech to the...