Israeli Prime Minister Benjamin Netanyahu is claiming that Defense Minister Ehud Barak is trying to spark conflict between Israel and the United States. 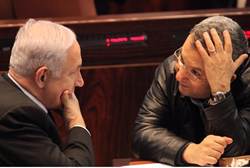 The two have been close confidants, with Barak, a left of center politician, originally giving Netanyahu legitimacy in the U.S. as a man of balance politically.  Barak was Netanyahu’s superior officer during their IDF service.

According to Arutz 2, during a meeting Tuesday between the Prime Minister and Finance Minister Yuval Steinitz, Netanyahu revealed signs of mistrust and conflict between himself and his defense minister, saying Barak went to the U.S. to stir up trouble, with intentions of returning to Israel as the hero who stood up to Obama and the rest of Washington.

Steinitz had previously warned Netanyahu about Barak. In an interview with Ulpan 6, he said “Barak has already stung twice before. Once with the Kadima party and then with Prime Minister Ehud Olmert and once with his friends in the Labor party…he’s bound to sting again.”

Speculation of conflicts between Obama and Washington and Netanyahu and Israel have been stirred up in the past few months as the threat from Iran continues to increase and calls for action continue to be drenched in double talk and pushed off for a later date.

Netanyahu has scolded the White House for being too weak on Iran and as recently as last week, President Obama refused to meet with Netanyahu during his trip to New York for the UN General Assembly. The two had a long telephone conversation instead, with Obama blaming his campaign schedule for refusing the request for a meeting.

Netanyahu continues to pressure the U.S. to act on Iran, demanding at the General Assembly that a “red line” be set for an attack on Iran. Yet for some, Netanyahu’s speech was seen as a temporary concession to the U.S.’s demands to forestall an attack, although the PM stressed that economic sanctions have hurt Iran, but had no effect on its nuclear enrichment plans..

Barak, in favor of bombing Iran, might not be on the same page as Netanyahu, and with Israeli elections coming up, the two might soon diverge to fulfill their own political agendas.

In the most recent attack in the name of Islam, Muslim protesters attacked Buddhist villages in Bangladesh, after an image...