A shocking attack on a Border Police officer in northern Jerusalem recently received nationwide press coverage in which photos, shown by Channel 2, show an Arab mob hurling firebombs at a fortified police position in the Shuafat neighborhood and banging on its windows. 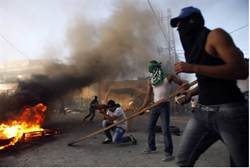 Attacks on officers are not uncommon in Shuafat, however, in this case the officer remained alone as fellow officers, standing just 100 meters away, were told not to intervene.

The officer can be heard on tape shouting, “I don’t know what to do,” and “I’m burning, come save me.”

Three officers stationed nearby were given orders not to intervene but rather to wait for the unit commander to issue an order.

The incident ended when more forces arrived in an armored jeep and drove the mob away. The officer who had been under attack was lightly wounded due to smoke inhalation.

Coverage of the incident prompted Police Commissioner Yochanan Danino to order the formation of a committee to recommend changes to the existing procedure regarding an officer under attack.

Border Police commanders have defended the inaction caught on film. The purpose of the fortified position the officer held is to serve as a front line in case of rioting, they said.

“The pictures were selectively edited by the photographer, and did not include the Border Police team’s assault on, and dispersal of, the riot,” they added.

In Case You Missed It:  Virginia Cop Wants His Job Back After He was Doxxed and Fired for Donating to the Kyle Rittenhouse Defense Fund
Posted in Israel, Terrorism and tagged Freedom, Islam, Israel, Jerusalem, Jihad, Military, Muslims, Palestinians, Riots, Terrorism.

Chief Rabbi: Israel Will Win Against Iran – with or without USA

Israel will be victorious over Iran, with or without the help of the United States, says Chief Rabbi Metzger, who...