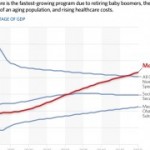 In recent weeks, liberal politicians, editorialists, and policy analysts have vigorously attacked reform of Medicare based on defined-contribution financing. In fact, this approach to reforming Medicare has a long bipartisan tradition, going back to the 1980s and Representatives Richard Gephardt (D–MO) and David Stockman (R–MI). Much of this criticism is distorted, misleading, or just plain wrong.

Here are some articles that set the record straight:

“Opponents of Medicare premium support routinely charge that it would cost future retirees $6,400 more annually. In fact, this dollar amount is incorrect, and the charge is erroneous.”

“A debate that has been fought largely over the airwaves is about to go head-to-head. Medicare reform is a huge part of that debate, and the left—bolstered by the media—has been promoting two huge falsehoods on the issue.”

“Politicians have promised Medicare benefits worth $37 trillion over the next 75 years. But that huge amount of benefits isn’t paid for, and so those promises will not be kept.

“That is why Republicans and Democrats agree—albeit usually in private—that a major reform of this healthcare program for the elderly is necessary.”

“[E]xtending Medicaid to 11 million more Americans – as Obamacare intends – won’t do any good if the newly covered can’t find a doctor. And that outcome looks likely.

“To see what the candidates really think about Medicare, voters need to set aside the overheated campaign rhetoric and look at the facts, starting with the candidates’ policies for Medicare Advantage. The differences are stark, and revealing.”

The UE Number dropped because 368,000 workers dropped off the UE rolls and stopped looking last month. Even if the...