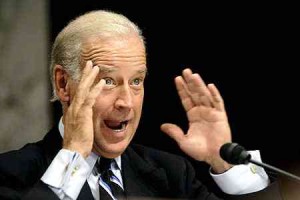 everything from Libya and Iran to the economy. Biden’s demeanor was the story of the evening: smirking, laughing, snorting, shaking his head. The strategy seems to have been to laugh off America’s problems, since the Obama administration has done nothing to solve them.

The debate itself was secondary to the demeanor of Biden. Biden had nothing to run on, so he decided to distract. And those pearly whites were a bizarre distraction from what could have been a substantive debate.

Biden interrupted Ryan repeatedly. He would not allow Ryan to finish an answer; where he stopped interrupting for even a few moments, his moderator ally, Martha Raddatz, jumped in to help him cut Ryan short.

This was the big problem for Biden going in: the American people didn’t like him. His favorables were far lower than Ryan’s. This debate did him no favors. And if the vice presidential debate was any indicator of the new, aggressive strategy of the Obama/Biden ticket, it will be off-putting to Americans in a dramatic way. It appears blustery and unlikeable – and most of all, dramatically angry and unserious.

Biden did it because Obama was somnambulant during the first debate. So Biden came out swinging. And more than anything else, he came out like an enormous bully, determined not to let Ryan get in a word edgewise.

Martha Raddatz, the moderator, did nothing to stop Joe Biden from repeatedly interrupting a very polite Paul Ryan, forcing Ryan to exclaim that the American public might prefer for each to speak in turn; her questions were significantly tougher for Ryan than they were for Biden, and she even allowed Biden to jump in to supplement questions. The time imbalance was substantially in Biden’s favor.

As far as the substance, the debate was a mockery. With regard to foreign policy, Biden told lie after lie. Biden continued pushing the awful Obama administration flip-flops on their Libya story; Ryan accurately called it an “unraveling of American foreign policy.” Biden suggested that Iran was slowing its nuclear development, without a shred of evidence. On Afghanistan, Ryan showed fluency, but Biden’s anger overcame Ryan’s fluency and made Ryan appear tentative.

Ryan told the truth about Obama’s economic record, slapping Biden hard on the unemployment rate in Scranton, Pennsylvania. Biden repeated tired falsehoods about the size of the Romney tax cuts, and whined about lack of specifics on the Romney economic policy. He did score points on Romney’s tax policy; Ryan didn’t respond with the alacrity necessary, and didn’t give a good answer to why he had signed two letters requesting stimulus grants for constituents in his district. On defense policy, Ryan cited Obama’s defense cuts as problematic; Biden suggested they were just fine.

There were memorable moments. At one point, Biden questioned the infamous Mitt Romney statement about “the 47%.” Ryan shot back that Biden was surely familiar with saying things he didn’t quite articulate correctly. Biden then said he only said things he meant – which will surely make Americans wonder just what he meant when he said that Romney would put people in chains, or that the middle class had been “buried” under Obama.

But once again, the substance of the debate was not the substance. It was the attitude. Ryan was soft-spoken, sincere, and serious. Biden seemed to take the entire proceeding as a farce. In treating it so, he made it so. More importantly, he made the Obama administration look like what it is: a bullying, bloviating, obnoxious administration more interested in talking over its opponents than working with them to improve the lives of Americans.

WORD CLOUD: Biden and Ryan at the Vice Presidential Debate