A tracking poll published Thursday by TIPP for Investors’ Business Daily shows the hard-to-believe statistic of 44% support for Mitt Romney among likely Jewish voters, versus 40% for Obama, with 16% undecided. 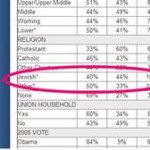 The statistic is qualified with the comment that it is based on a small sample and should therefore be viewed with caution.

The poll was conducted among 812 likely voters, with an 8% advantage for registered Democrats over Republicans.

If the numbers are in any way close to representing reality, they reflect an unprecedented shift in Jewish voting preferences. Jews have voted overwhelmingly for Democratic presidential candidates for decades. Obama enjoyed 78% of the Jewish vote in the 2008 election.

Jewish support for Obama has been slipping recently. In September, the TIPP poll gave him 59% versus 35% for Romney. That in itself was seen as quite an accomplishment for Romney. It was not far from the 40 percent number in support of Dwight Eisenhower recorded by Jews in 1956, which was the highest backing by Jews for a Republican in nearly a century.

Just one day ago, on Wednesday, the TIPP tracking poll showed Obama leading Romney 47%-25%. This makes Thursday’s numbers appear like a wild fluke or a mistake. However, these are the numbers that currently appear on the IBD/TIPP website.