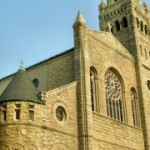 When the vice presidential debate last night turned to the issue of religious liberty and Obamacare’s Health and Human Services (HHS) mandate, the discussion didn’t get all the facts straight.

That is actually false.

The real “fact” about the anti-conscience mandate is that it applies to almost all employers—including many religious organizations such as hospitals and social service providers. It requires them to provide coverage that pays for abortion drugs, contraception, and sterilization regardless of moral or religious objections.

The mandate affords the narrowest religious exemption in federal law, effectively covering only formal houses of worship. As the U.S. Conference of Catholic Bishops explained in a statement today:

The HHS mandate contains a narrow, four-part exemption for certain “religious employers.” That exemption was made final in February and does not extend to “Catholic social services,Georgetownhospital, Mercy hospital, any hospital,” or any other religious charity that offers its services to all, regardless of the faith of those served.

If the Obama Administration had adequately protected the freedom of so many religious employers, one might ask—as Representative Paul Ryan (R–WI) did in last night’s debate—“why would they keep suing you?”

In fact, over 100 individuals and organizations have been forced to file 33 lawsuits against the Obama Administration to demand respect of their religious liberty. The choice before these employers is untenable: either violate their conscience or refuse to comply with the anti-conscience mandate and face burdensome fines.

These individuals, organizations, and businesses contribute mightily to civil society by providing education, health care, and countless social services. Heritage has profiled a few of the many victims of Obamacare’s coercive disregard for religious freedom. From charities faced with hefty fines for practicing what they preach to business owners told that their religious freedom stops at the door to colleges forced to end student health plans because of Obamacare’s costly provisions and threat to conscience, the health care law jeopardizes the work of countless institutions.

Sadly, last night wasn’t the first time Biden has distorted the facts on the mandate’s serious assault on religious freedom. Contrary to what the Obama Administration would have Americans believe, there is no so-called “accommodation” for religious employers not covered by the mandate’s narrow religious exemption. The Administration’s press conference promises and bureaucratic announcements of a supposed “accommodation” neither changed the coercive mandate currently in effect nor provided any workable or adequate solutions to the mandate’s trampling on religious liberty. They are nothing more than a smokescreen to hide the mandate’s unconstitutional assault on a basic freedom.

Policymakers and national leaders should understand the primacy of religious freedom in the American constitutional order and work to protect that freedom, not undermine it. A first step towards the greater protection of religious freedom is rescinding the anti-conscience mandate and repealing Obamacare with all of its liberty-crushing provisions.

Heritage’s Jennifer Marshall recently spoke about the threat to religious liberty posed by the HHS mandate on the Colson Center’s Two-Minute Warning. Listen to that segment here.

Fact Sheet: Obamacare Anti-Conscience Mandate: An Assault on the Constitution

VIDEO: Joe Biden Laughs at the Issues During Debate

Joe Biden appeared to laugh whenever Paul Ryan discussed some very serious issues about America's security and the financial well-being...