Foreign Minister and Deputy Prime Minister Avigdor Lieberman (Yisrael Beytenu) said Sunday that not making the right decisions, coupled with an unwillingness to adopt new anti-Iran sanctions, will bring us to the edge of a new reality, like that of the 30s, in which the West decided to appease Hitler instead of nipping him in the bud. 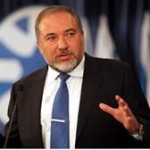 Lieberman said that the most important current event in the international arena is the meeting of EU foreign ministers in Luxembourg Monday. He expressed hope that additional meaningful sanctions will be slapped on Iran by the Europeans.

Lieberman was speaking at a reception for his Brazilian counterpart, Antonio Patriota.

The minister said it was “critical, vital and necessary” for the EU to give the Iranians the right message – that is, that the West has enough willpower and determination to stymie Iran’s attempts to destabilize the world.

CBS News and "60 Minutes" reporter Lara Logan has lambasted the Obama administration for pushing what she called the "major...