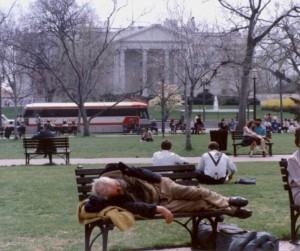 Welfare spending has grown substantially over the past four years, reaching $746 billion in 2011 — or more than Social Security, basic defense spending or any other single chunk of the federal government — according to a new memo by the Congressional Research Service.

The steady rise in welfare spending, which covers more than 80 programs primarily designed to help low-income Americans, got a big boost from the 2009 stimulus and has grown, albeit somewhat more slowly, in 2010 and 2011. One reason is that more people are qualifying in the weak economy, but the federal government also has broadened eligibility so that more people qualify for programs.

Sen. Jeff Sessions, the ranking Republican on the Senate Budget Committee, who requested the Congressional Research Service report, said it underscores a fundamental shift in welfare, moving away from a Band-Aid and toward a more permanent crutch.

“No longer should we measure compassion by how much money the government spends but by how many people we help to rise out of poverty,” the Alabama conservative said. “Welfare assistance should be seen as temporary whenever possible and the goal must be to help more of our fellow citizens attain gainful employment and financial independence.”

The CRS numbers tell a complex story of American taxpayers’ generosity in supporting a varied social safety net, ranging from food stamps to support for low-income AIDS patients to child-care payments to direct cash going from taxpayers to the poor.

By far the biggest item on the list is Medicaid, the federal-state health program for the poor, which at $296 billion in federal spending made up 40 percent of all low-income assistance in 2011. That total was up $82 billion from 2008.

Beyond that, the next big program is food stamps, at $75 billion in 2011, or 10 percent of welfare spending. It’s nearly twice the size it was in 2008 and accounts for a staggering 20 percent of the total welfare spending increase over those four years.

Several programs to funnel cash to the poor also ranked high. Led by the Earned Income Tax Credit (EITC), Supplemental Security Income and the Additional Child Tax Credit (CTC), direct cash aid accounts for about a fifth of all welfare.

Mr. Sessions’ staff on the Budget Committee calculated that states contributed another $283 billion to low-income assistance — chiefly through Medicaid. Combined, that means the federal and state governments spent $1.03 trillion on welfare programs.

Richard Kogan, senior fellow at the liberal-leaning Center on Budget and Policy Priorities, said that while the dollar amounts for low-income assistance are growing, they are still about the same slice of the budget pie when viewed over the long run. He said the costs may have spiked during the recession but are projected to drop back to regular trends once the economy recovers.

“In short, whatever one thinks about the merits or costs of these programs, other than Medicaid they are contributing nothing to long-run budgetary pressures,” he said.

As for Medicaid, which has seen major spending increases, Mr. Kogan said even there it may be a savings.

“Medicaid provides health care at a noticeably cheaper price than Medicare does, and both are cheaper than the cost of private-sector health insurance,” he said. “The problem is not that the programs are badly designed — it is that the entire health care system in the U.S. is much more expensive than in any other advanced country.”

Mr. Kogan said that, despite the increase, the cash assistance figure was “a shockingly small amount of money” in the scheme of things.
“Virtually all the rest is in the form of in-kind assistance: Medicaid, SNAP, WIC, housing vouchers, Pell grants, LIHEAP, and child care vouchers; or in the form of direct services, such as community health centers, Title 1 education, foster care, school lunch, and Head Start,” he said.

Rather than straight transfers, those other programs provide support for services Congress has deemed worthy of funding. SNAP is the Supplemental Nutrition Assistance Program, or what used to be called food stamps; LIHEAP is the Low Income Home Energy Assistance Program; WIC is the Women, Infants and Children nutrition program; and Pell Grants provide assistance for college costs.

The report comes as President Obama and Republican presidential nominee Mitt Romney are fighting over the size and scope of government assistance.

Mr. Romney was damaged last month by caught-on-camera remarks in which he said 47 percent of Americans are dependent on government and see themselves as victims.

In Tuesday’s debate Mr. Romney blasted Mr. Obama for overseeing a 50 percent increase in the number of people on food stamps during his first term, which has risen from 32 million to 47 million.

But the two men also share some agreement on safety-net programs. In the debate Mr. Romney said he wants to increase the Pell Grant program to help low-income children attend college.

The CRS report looked at obligations for each program as its measure of spending. It included every program that had eligibility requirements that seemed designed chiefly to benefit those with lower incomes. The report looked at programs that had obligations of at least $100 million in a fiscal year, which meant some small-dollar welfare assistance wasn’t included.

Obama Does Have Investments In Cayman Islands Trust

"Barack Obama has pension investments that include Chinese firms, and "investments through a Caymans trust." -Mitt Romney, During Tuesdays debate. One...