Not only did President Obama come into the second presidential debate more aggressive and prepared, but he brought a secret weapon — the moderator, Candy Crowley.  At two pivotal moments, Ms. Crowley, typically a relatively fair reporter, showed her bias and changed the course of the debate. 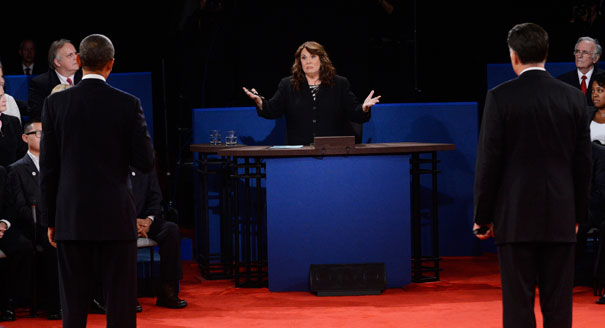 First, she backed up Mr. Obama’s assertion that he had called the attacks at Benghazi a “terrorist attack” in a Rose Garden event on the day after the tragedy.  (After the debate, she reversed her assessment and stated that she was in error.)  Second, she consistently let Obama stay two minutes ahead of Mr. Romney in terms of time, and at the end of the debate, Obama had a full three-minute advantage.  In addition, at the end of the debate, Crowley gave Obama the last two minutes for a peroration where he gave new arguments (including the “47 percent”) without fear of rebuttal.

Further, throughout the debate, Crowley thanked Obama for his remarks with a very deferential “Thank you, Mr. President”; she merely turned away from Romney at the end of his time.  Thus, the town hall-style format ended up being a three-way debate, with Romney facing two opponents.

Even against those odds, Romney came away the winner.  Obama improved his performance and clearly was more engaged in the second debate, but at best, he tied Romney on content and lost significantly on delivery and style.

In the debate training sessions prior to the second debate, Obama’s team worked to make him more aggressive and willing to confront Romney, while the Romney team worked to get their candidate to be empathetic, to show the dramatic differences between the two men, and to clarify the critical choice facing voters in just three weeks.  Obviously, Obama learned his lessons well: he was aggressive and confrontational.  Likewise, Romney presented the choice facing voters in clear and unequivocal terms and with an empathetic manner toward the audience and a respectful tone toward the president — even though he pointed out their differences quite aggressively.  Romney spoke in a low-pitched tone of voice, seemed in control, and appeared level-headed as he hammered home the president’s dismal record over and over again and constantly brought the focus back to unemployment, the unprecedented accumulation of debt, the frightening increases in the deficit, and the need for job-creation and a simplified tax code.

As the two candidates for president entered the debate, Romney had the wind at his back; Romney’s poll numbers are surging, and he is the man with momentum, while Obama is struggling.

Pundits agreed that it was a make-or-break event for the president.  In that sense, Obama did well; he did not turn in another abysmal performance.  He was prepared and seemed confident; he had his usual rapport with the audience and seemed energetic and focused.  His high-pitched voice, though, revealed his tension, anger, and lack of control; he came across as whiny and touchy.  His constant refrain accusing Romney of lying was annoying, especially when accompanied by his air of superiority and condescension.  In contrast, Romney pointed out several areas where the two candidates agreed, and even when they passionately disagreed, Romney was respectful of the president.

The media kept talking in the run-up to the debate about the necessity for the president to “bring women home” from their defection to Romney after the first debate.  So the two men spent an inordinate amount of time talking about women.  The tone and confrontational manner of the second debate, though, was not female-friendly and defeated any attempt to draw women to anyone’s side.  Romney did score points, however, by pointing out that in the past four years, over 580,000 women have lost jobs, and 3.5 million more women are in poverty.  The two candidates physically invaded each other’s space and directly contradicted each other to the point of discomforting the immediate audience as well as those viewing on television.

Obama continued his hackneyed attacks on Romney, calling him a hypocrite and a liar over and over again.  He repeatedly echoed the phrase “What Mr. Romney just said isn’t true.”  He also continued the race and class warfare that has characterized his campaign — and indeed, his administration — to the effect that Romney favors the rich over the middle class and disdains the poor.  Romney, for his part, continued to focus on the fact that Obama’s policies have “crushed the middle class” and that his experience throughout his business and political career has proven that he knows how to turn bad economic circumstances around.

Obama was never able to adequately defend his record, nor did he present a vision or plan for his second term that would reverse the dismal litany of failures that Romney cited in a long monologue that detailed specific ways in which Obama’s policies have led to crushing the middle class.

While the candidates have pointedly avoided discussing the social issues, Romney directly addressed the connection between the breakdown of the family and the nation’s cultural problems, including the current economic crisis.  He talked passionately about the need for children to have a mom-and-dad family and the necessity for cultural changes in order to curb the violence that plagues the nation.

In summary, on content the candidates tied, having an equal number of points in their favor.  But the president needed to dominate the debate; instead, he merely held his own, and with his high-pitched, whiny voice and condescending manner, he lacked Romney’s gravitas.  Mr. Romney was more presidential than the man who has held the office for four years — even when it was a three-way debate.

Janice Shaw Crouse, Ph.D. is a former presidential speechwriter (Bush 41), and her doctoral dissertation analyzed the Carter-Ford presidential debates.  She is a spokeswoman for the Concerned Women for American Legislative Action Committee.

Many a truth is said in jest. Tonight at the Annual Al Smith Dinner at the Waldorf Astoria Hotel...... Mitt...