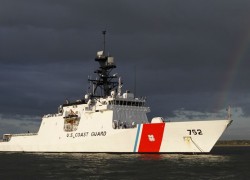 The third and final presidential debate between President Obama and former Governor Mitt Romney will feature several different questions on the role of America abroad and other aspects of foreign policy. Obama and Romney will likely address the nation’s impending spending crisis and automatic defense budget cuts, known as sequestration.

Heritage senior research fellow Steven Bucci and research associate Emily Goff illustrate the disproportionate effect that sequestration will have on defense spending compared to entitlement programs. The $492 billion in automatic defense cuts from 2013-2021 would represent 42.6 percent of the overall cuts, more than three times the impact on entitlements:

The effect of the cuts would be drastic, according to Bucci and Goff:

The gaping hole in defense funding would deteriorate our military’s readiness. Indeed, the threat of sequestration is already adversely affecting America’s ability to respond to growing threats. These cuts would leave the U.S. with its smallest Army since World War II, its smallest Navy since World War I, and its smallest Air Force ever—and this at a time when the world is not growing safer but more dangerous every day. (Russia, China, Iran, and resurgent Islamist terrorists are just a few of the threats.)

Prioritizing within the budget, say the authors, will assist in “directing the government’s fiscal resources where they are needed and spending within our means.”

“Sequestration,” they said, “accomplishes neither.”

As Bucci and Goff point out, cutting defense spending will not provide for the desired effects of reining in the budget:

Gutting the nation’s defense capabilities, however, is not the responsible way to budget or achieve budget savings. Even eliminating defense completely wouldn’t balance the budget, because entitlement program spending would continue to soar.

The entitlement programs — Medicare, Medicaid, and Social Security — are projected to double as a percentage of the nation’s economy by 2050.

Bucci, along with Alison Acosta Fraser, director of the Roe Institute for Economic Policy Studies, argue that fixing defense sequestration is possible without tax increases, and to do otherwise would be “gambling with national security.”

The reasons Obama has Failed us

By Gordon Smith-   This week, I decided to list the reasons I would not vote for Barack Obama in...