The top government watchdog for the Department of Energy has been asked to investigate a stimulus-backed Michigan battery plant where workers reportedly spend hours every day playing cards, watching movies and generally not working. 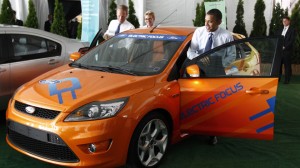 Obama gets into an electric Ford Focus as he attends the groundbreaking of a factory for Compact Power Inc. in Holland, Mich.

FoxNews.com earlier reported that the LG Chem plant in Holland, Mich., which was approved for a $150 million federal grant, had started putting workers on furlough due to lack of demand for their lithium-ion cells.

The new allegations surfaced in a report Thursday by Michigan station WOODTV. Current and former employees at the LG Chem plant in Holland, Mich., told WOODTV that a “whole bunch of people” spend their time playing games, including Monopoly and video games, on the company clock.
“There’s no work,” one employee said.

The facility, which was opened in July 2010 with a groundbreaking attended by President Obama, has yet to produce a single battery for the Chevrolet Volt, the troubled electric car from General Motors. The plant’s batteries also were intended to be used in Ford’s electric Focus.

Production of the taxpayer-subsidized Volt has been plagued by work stoppages, and the effect has trickled down to companies and plants that build parts for it — including the batteries.

In Case You Missed It:  Biden’s Foreign Policy Is “Reverse American Exceptionalism” When It Comes to Dealing with Iran
Posted in Tyranny and tagged Obama, Obamanomics, Stimulus.