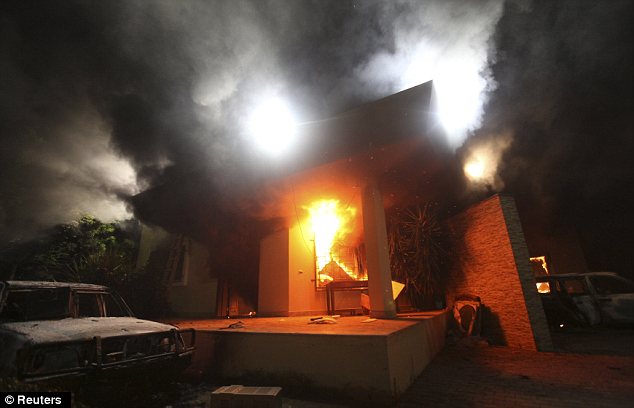 Last Friday, the House Oversight and Government Reform Committee released 120 pages of documents on the situation in Benghazi, Libya, from March 2011 to September 2012. In light of these documents, the denial of additional U.S. security personnel in Libya is shocking. The documents provide plenty of new material for tonight’s presidential debate.

A final report from Ambassador Stevens on concerns over violence was sent on the fateful day of September 11, hours before armed terrorists attacked the embassy and killed the ambassador and three members of his small security staff.

First is an Action Memo addressed to Under Secretary Patrick Kennedy sent in December 2011 requesting an extended presence in Benghazi through the 2012 calendar year. Of the two recommendations given was that Kennedy approve “a combined footprint of 35 U.S government personnel in Benghazi, including eight State Department and USAID and two TDY beds.”

Both recommendations were signed in the affirmative. Background information, however, states that, due to budget constraints, Diplomatic Security’s (DS) permanent presence was reduced to five, down from 17.

According to a thread of emails from Nordstrom to various State Department personnel, as early as February of 2012 there were concerns regarding the lack of security resources in Benghazi. Nordstrom went on to say that because there were only 2 DS agents supplied on the ground, it “severely limits operations in Benghazi” and the problem couldn’t be rectified because he had “been advised that DS isn’t going to provide more than 3 DS agents over the long term.”

In Case You Missed It:  OBAMAGATE: US Attorney John Durham has Requested to Interview Former Corrupt CIA Director John Brennan

Tragically, on September 11, the weekly Tripoli embassy report—signed by Ambassador Stevens—also detailed growing violence. It concluded with testimony from a very frustrated commander of Libya’s Supreme Security Council, who detailed fears of potential strikes by ex-regime supporters. He also complained about the state of security and police forces in Benghazi “who were too weak to keep the country secure.”

And yet on September 14, White House Spokesman Jay Carney denied that the Administration had “actionable intelligence indicating that an attack on the U.S. mission in Benghazi was planned or imminent.” Now, the incriminating record speaks for itself.

The Obama campaign has recently been accused of violating campaign rules and accepting donations from foreign citizens. According to the...