Of Israel’s neighbors, Lebanon always stood out by virtue of its weak central government, but for the first twenty years, 1948-68, this did not present difficulties to Israel; only when the Palestinian created a state-within-a-state there did its anarchy became a major challenge to the Jewish state, as symbolized by the Beirut airport raid of December 1968. Many skirmishes followed as well as two wars (those of 1982 and 2006). Lebanon remains anarchic and the home base for Hezbollah; it could well be a future Arab-Israeli battlefield.

The powerful Egyptian state ruled Sinai with an iron fist until late in Mubarak’s term when, as the Bedouin became increasingly Islamist, his regime did not keep control. Terrorism against Egyptian tourist targets followed (such as the attack on Sharm el-Sheikh in 2005) as well as against Israeli territory. These attacks increased after Mubarak’s resignation, making the region a no-man’s-land, and will probably continue to rise.

Hamas took over in Gaza two years after the unilateral Israeli withdrawal in 2005; not surprisingly, it began shelling Israeli territory, especially the town of Sderot, leading to the Israeli invasion of 2008-09. That tamped down on the violence but the shelling continues. 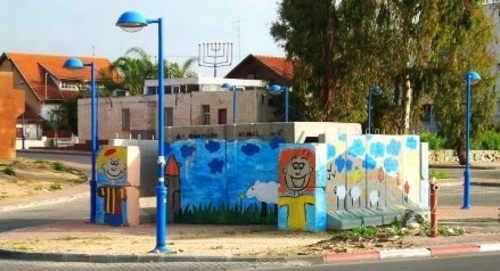 A public shelter in Sderot, painted so as not to scare the children.

Now comes word from Israeli military intelligence that it expects the Golan Heights to become anarchic as the Assad regime pulls its forces for more urgent duties and various terrorist groups make hay.

If this is the case, then the only two borders left with any security are those of Jordan (where the monarchy has its own troubles) and the West Bank (where the IDF continues to patrol).

Comments: (1) As I noted a half year ago in “Anarchy, the New Threat,” this trend away from despotism and toward anarchy is worldwide and especially pronounced in the Greater Middle East, where it also includes Libya, Somalia, Yemen, Iraq, and Afghanistan. (2) The Israeli preoccupation with Iranian nuclear weapons should not distract completely from this homelier but still significant threat. (July 18, 2012)

Looking Back at Romney’s Remarkable Speech in Jerusalem (VIDEO)