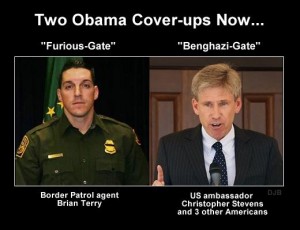 Charles Woods, the father of Tyrone Woods, who was killed in the 9/11 terrorist attack at the American consulate in Benghazi, Libya wants answers, and he wants them now. He met Obama and said Obama looked away while shaking his hand and was not sincere in his apology to the events that night in Libya.

Fox News has reported that sources who were on the ground in Benghazi that there was an urgent request from the CIA annex for military back-up during the attack on the U.S. Consulate and subsequent attack several hours later was denied by U.S. officials. CIA operators twice told to”stand down” rather than help the ambassador’s team. Soon after, they were again told to “stand down.”

It was revealed that Secretary of State Hillary Clinton had ordered more security at the U.S. mission in Benghazi before it was attacked where four Americans, including U.S. Ambassador Christopher Stevens were murdered by Al-Qaeda but President Obama denied that request.

Former President Bill Clinton has been “urging” his wife [Hillary] to release official State Department documents that prove she called for additional security at the compound in Libya, which would almost certainly result in President Obama losing the election. Everyone knew what was happening in Benghazi from the CIA to the National Security Agency and that there’s intelligence cables that have not been released.

Valerie Jarrett who’s the Senior Adviser to Obama and Assistant to the President for Public Engagement and Intergovernmental Affairs, she has a role in the cover-up of this incident. Obama let our ambassador and others die. In real time, watching it happen, and he didn’t do anything about it.

Now there are stories of the mysterious Libyan ship, reportedly carrying weapons and bound for Syrian rebels and this ship has links to the Sept. 11 terror attack on the U.S. Consulate in Benghazi. Through shipping records, Fox News has confirmed that the Libyan-flagged vessel Al Entisar, which means “The Victory,” was received in the Turkish port of Iskenderun, 35 miles from the Syrian border, on Sept. 6, just five days before attack. According to an initial Sept. 14 report by the Times of London, Al Entisar was carrying 400 tons of cargo.

Reportedly weapons on the Ship, described by the report as the largest consignment of weapons headed for Syria’s rebels on the front-lines, some of these rebels are members of known terrorist groups including Al-Queda. The cargo reportedly included surface-to-air anti-aircraft missiles, RPG’s and Russian-designed shoulder-launched missiles known as MANPADS. these weapons systems are extremely accurate and very simple to use,” Fox News military analyst Col. David Hunt explained. He said the passage of weapons from Libya to Syria would escalate the conflict. “With a short amount of instruction, you’ve got somebody capable of taking down any, any aircraft. Anywhere in the world.”

In March 2011, the Reuters news service first reported that President Obama had authorized a “secret order … (allowing) covert U.S. government support for rebel forces” to push the Libyan dictator Muammar Qaddafi from office.
At a hearing on March 31, before the House Foreign Affairs Committee, several lawmakers raised concerns about the finding reported by the Reuters news service and whether the Obama administration knew who constituted the rebel forces and whether Islamists were among their ranks.

What assurances do we have that they will not pose a threat to the United States if they succeed in toppling Qaddafi?” Republican Chairwoman Ileana Ros-Lehtinen, R-Fla., asked. “There are reports that some opposition figures have links to Al Qaeda and extremist groups that have fought against our forces in Iraq.”

Was Obama finished with our Ambassador to Libya where the Arms Trading was concerned? Did he believe Chris Stevens was going to go public with what he knew about this administrations illegal trading of weapons to the enemy?

Is this a cover-up much larger than Watergate, leading to the deaths of American citizens while arming terrorist groups in the middle east?

New Georgian PM: Promote Economic Freedom, Not the Statism You Learned in Russia

Former AC Milan star Kakha Kaladze is more than comfortable on the soccer pitch, where he played for 10 years...