(CBS News) On the night of the deadly attack on the U.S. consulate in Libya, a team of American military commandos was sent from Europe to an airfield at Sigonella, in Sicily, Italy, putting them at least an hour’s flight away from Benghazi, CBS News has learned.

The team, known as the Commander’s In-extremis Force, was designed specifically for quick reaction to unforeseen emergencies. But U.S. officials say it did not arrive in Sicily until after the attack was over.

Even if the team had been ready in time, confusion about what was happening on the ground in Benghazi — and State Department concerns about violating Libyan sovereignty — made a military rescue mission impractical, the officials say.

See Sharyl Attkisson’s report on the cables, above.

That confusion can be read in State Department cables from the day of the attack. At 4:05 p.m. ET, a cable warned the consulate was under attack. Forty-nine minutes later, another cable reported that the firing had stopped and the compound had been cleared.

In fact, the U.S. ambassador and one other State Department employee were dead and the attack was far from over.

Seven hours later, another cable reported that a Benghazi shelter location was also under attack by mortar fire — a reference to a safe house about a mile from the consulate, where approximately 30 Americans had taken cover. Daylight revealed the safe house had taken a direct hit, killing two more Americans.

U.S. officials confirmed Wednesday that a 28-year-old man suspected of taking part in the attack is now in custody in Tunisia, but he is not considered to be one of the ringleaders. So far, the FBI has not been allowed to question him.

Meanwhile, CBS News correspondent Margaret Brennan reports that the FBI and State Department have reviewed video from security cameras that captured the attack on the consulate.

The audio feed of the attack was being monitored in real time in Washington by diplomatic security official Charlene Lamb. CBS News has learned that video of the assault was recovered 20 days later from the more than 10 security cameras at the compound.

The government security camera footage of the attack was in the possession of local Libyans until the week of Oct. 1. The video will be among the evidence that the State Department’s review board will analyze to determine who carried out the assault. 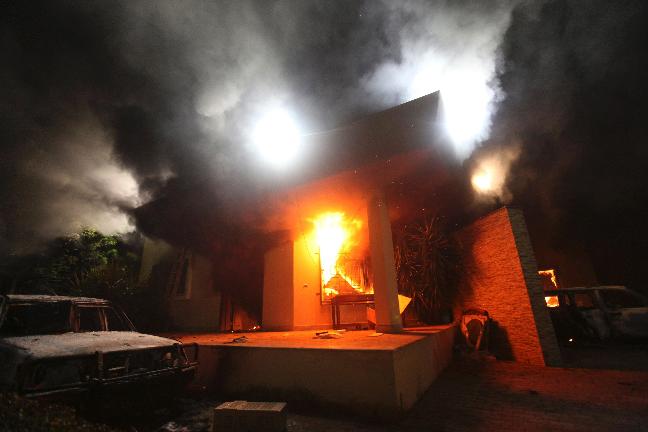 U.S. Consulate in Benghazi after the building was raided by Terrorist.

Obama Is Trying To Laugh His Way Out Of This One

Less than two weeks before the presidential election, billionaire Donald Trump has made Barack Obama an offer he cannot refuse...