Former President Bill Clinton exploited the devastating storm that is pounded the Eastern U.S. coast and charged that Mitt Romney would be worse than Frankenstorm Sandy if he is elected. 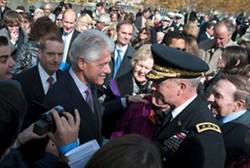 While President Barack Obama and Romney tried to show they are more concerned for the lives and property of Americans than they are about getting elected, Clinton plowed into Romney during a speech to Democrats in Connecticut, two days before Sandy took out its wrath on the state.

“We’re coming down to the 11th hour. We’re facing a violent storm,” Clinton said. “It’s nothing compared to the storm we’ll face if you don’t make the right decision in this election.”

Clinton used undiplomatic language in his accusations that Romney is promising the same jobs that Obama is about to deliver.

In a separate campaign stop in Ohio, Clinton charged Romney with “a load bull” by claiming that Chrysler is moving its Jeep production from the United States to China.

Even Jeep said “that’s the biggest load of bull in the world that they would ever shut down American operations,” Clinton said. Chrysler earlier had said n a somewhat contradictory statement that it “has no intention of shifting production of its Jeep models out of North America to China,” but is “simply reviewing the opportunities to return Jeep output to China for the world’s largest auto market.”