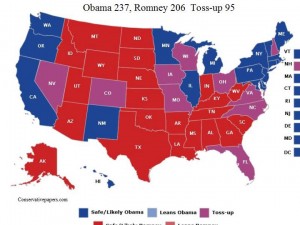 Wisconsin which may prove to be the key to the entire presidential contest remains a tie less than a week before Election Day.
Wisconsin: Obama 49%, Romney 49%

Romney ahead of the president 50% to 47% in the key swing state of Colorado. That marks little change from a week ago,
Colorado: Romney 50%, Obama 47%

Mitt Romney still earns 50% of the vote in the key battleground state of Florida, but his lead is smaller.
Florida: Romney 50%, Obama 48%

In total regarding the 11 swing states, Mitt Romney earns 50% of the vote to Obama’s 46%. Two percent (2%) like another candidate in the race, and another two percent (2%) are undecided.

Romney has now led for 12 straight days with margins of four to six points most of that time as of Halloween day, new polls coming out in the nest few days as Hurricane Sandy has limited access to some polling areas.

Lunch with Heritage Google Hangout on the “War on Women”

Our weekly “Lunch with Heritage” chats have grown over the past two years into a vibrant discussion of policy issues....