How desperate is hurricane-ravaged New Jersey? Not desperate enough to suspend a union monopoly that keeps the state in the bottom ten states for 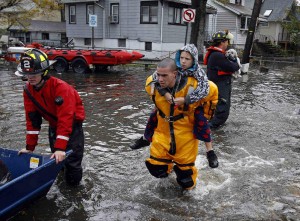 economic competitiveness (and #48 for business friendliness).

Just after Obama and Christies walk through, Relief crews from Alabama who were specifically called to New Jersey found themselves diverted to Long Island, NY after they arrived they were told their help was not welcome because they use non-union labor.

If this doesn’t show people just how bad the unions have become nothing will. People are without gas, food and lights and they are only worried about if it is union workers or not while people die?

In Case You Missed It:  CDC Quietly Drops Vaccine-Status Discrimination – Finally Admits Their Vaccines Do Not Prevent Anyone from Getting or Spreading the Virus
Posted in Freedoms, Tyranny and tagged New Jersey, Obama, Obamanomics.

The race for Ohio’s Electoral College votes remains very close, but now Mitt Romney now has a two-point advantage on...