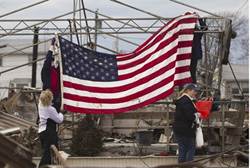 As New Yorkers look out across the waters of New York City Harbor, disaster response ships can been seen assisting in the recovery after Hurricane Sandy. While most would assume these forces come from the Coast Guard or other federal forces, six of these patrol boats are actually part of the New York State Defense Force (SDF).

SDFs are volunteer forces that cost little money to train and equip and are often principally composed of trained and capable U.S. reserve forces or retired military professionals. SDFs also have the advantage of being from and understanding the local area and thus are able to quickly respond to disasters. Additionally, they report directly to the governor of the state, so they do not face the legal barriers that national forces sometimes face in deploying to states.

Perhaps what is most important, though, is that each state can tailor its SDF to meet specific needs. While New York needed a naval militia to assist with its homeland security needs, New Mexico, for example, can focus its SDF on state needs such as border security and forest fire response.

New York and 22 other states and territories currently have SDFs. While this represents almost half the states, several high-risk states such as Hawaii, Florida, North Carolina, Illinois, Missouri, and Pennsylvania have no SDFs.

That is not to say that every state should have an SDF; each state should determine whether it has a need for more resources in order to mitigate threats. For those that do need more homeland security resources, the low-cost, rapid-response capabilities of SDFs make them an ideal solution.

The New York Naval Militia is actively assisting in the recovery of New York City’s vital waterways. It has proven the value of SDFs, and other high-risk states would be wise to heed the lesson.

Al Qaeda's cell in Somalia on Wednesday said Hurricane Sandy, which wreaked havoc on the East Coast, was Allah's punishment...