The left is already making the claims playing the card that Hurricane Sandy being a super-storm and claiming it was caused by man made global warming, without anything to back 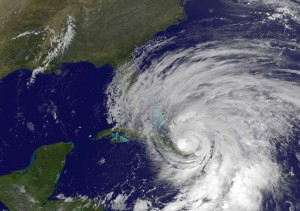 First lets understand hurricane Sandy was not a ‘super-storm”, it was a weak category 1 hurricane that morphed into a northeaster and hit these cities head on during high tide and a full moon (the perfect storm) . Unfortunately, the storm did devastate NJ and NYC, our hearts goes out to all those affected.

However, the excessive damage was due to the track of the storm and the timing of the landfall, not from the inherent strength of the storm. Sandy’s track turned due west and made a direct hit on the NJ coast. To compound matters, the storm made land-full during high tide on a full moon, which added significantly to the storm surge that inundated those communities. Had this same storm made landfall during low tide, the damage would have been more localized to the immediate coastal areas.

Northeast hurricanes are not all that rare. There were five hurricanes or tropical storms that hit the northeast in October or later in the 18th century, twelve in the 19th century, five in the 20th century and so far three in the 21st century.

Looking at ANY single weather event,, no matter how powerful or unusual tells one absolutely nothing at all about climate change without date, but that does not stop the left from making the claims. We don’t even know if global warming is caused by man or a normal warming period as seen before in the middle ages well before industrialization.

Its a pathetic attempt of the left to use this tragedy to push their global warming agenda and jump to conclusions without data to support them. The clean up is not even started and they are already making the storm political.